Spacing around \text{} in mathmode

Inspired by this question, here's my mathmode spacing bugbear.

I quite often have equations that look like this:

Now, you might notice that before and after each bit of \text{...} there is a "normal sized space". I can't imagine why I wouldn't want that space there, but I have to add it manually. Surely this should be the default behaviour of mathmode's text macro?

Why isn't it, and how could I make it so?

It's not the default behavior because you don't always want space. For instance, in your example, you don't want space before \text{If}, since that would indent your equation. Or consider

Again, that shouldn't be spaced out. Also, like in Caramdir's answer, I re-entered math mode within the \text, which often solves the spacing problems as well. You could define an \stext command for spaced out text:

(Literal spaces inside are the same as \  outside, I believe.) Another option might be

Then \textop{foo} would set foo as a binary operator, and \textrel{bar} would set bar as a binary relation. I'm not sure how this spacing would look, though, but it might work for what you want.

It probably doesn't add space because it is harder to remove space than to add space. One possible usage is something like 3-\text{connected graphs}.

Side remark: It is also possible to write your example as

If you want to introduce automatic spacing before or after \text, your best option is probably to make \text behave like an operator (\mathop), which is the closest thing to text inside math mode. The spacing introduced will be slightly smaller than normal text, but should still be acceptable. Here's the code (making sure that \text still works in text mode):

If you compare this to the respective commands \textbin and \textrel which are of type \mathbin and \mathrel (suggested in Antal's answer), you see that it works quite well in these typical uses of \text, even if the spacing is tight: 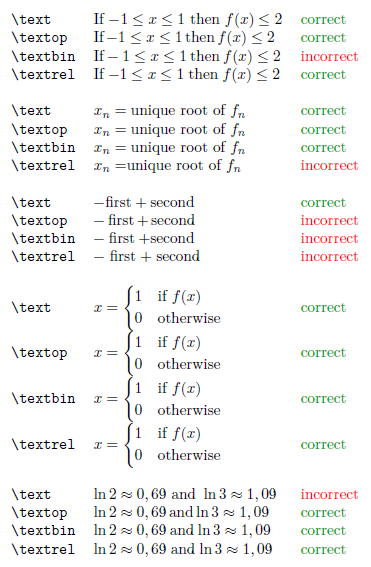 (The order of each command is the same as above.)

12
Avoiding placing `,\,` everywhere in mathmode
1
Spacing in displayed equations with a piece of text in the middle