Newline, indentation, parskip - when to use what in what stylistic manner?

I intend to use scrbook. In real-life literature, English and German language, the text often looks like this:

Especially in longer chapters there's often somewhere an empty line followed by a non-indented text. While the regular text often has new lines with indented text.

A popular example: The Ultimate Hitchhiker's Guide to the Galaxy on Amazon.com, scroll through it and you will see real-life text that is like this (Page 8 and 9 for example). Another example are the UK Discworld books by Terry Pratchett.

As mentioned in comments I think that usually in such circumstances the unindented paragraphs are logically section breaks with anonymous untitled sections. So like a titled section they suppress following indentation.

Spacing and font choice could be better and with acknowledgement to Douglas Adams, the except shown in the amazon fragment is I think logically something like this:

Which without any changes to the book layout produces this: 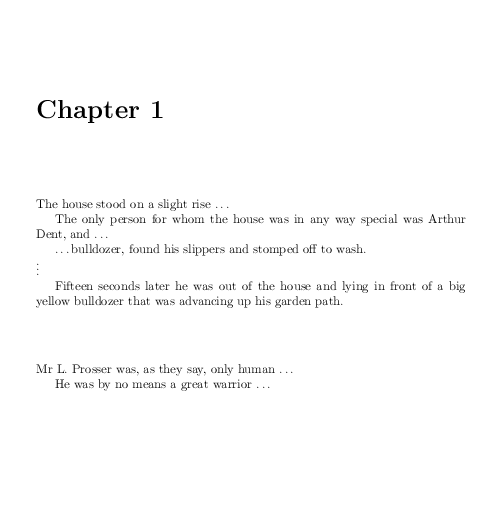 Not the answer you're looking for? Browse other questions tagged spacing indentation paragraphs best-practices parskip or ask your own question.

3
Controlling vertical space after headline when using \parskip
13
Too much whitespace before lists when changing the \parskip length
13
Too much space after sections when I change parskip
3
How to remove the skip after a listing when "\parskip" is increased with "\baselineskip"?
71
How to use the parskip package? (space in between paragraphs)
1
Correct spacing around environments without the comment symbol when using parskip?
235
When to use \par and when \\, \newline, or blank lines
1
Fix thmtool spacing when using the parskip package