Is there any way to make a circle knowing just two points on its diameter?

Here's the complete problem I'm trying to solve: there is a segment MN (but points M and N are calculated as an intersection of other lines so I don't know their coordinates) and I want to construct the Thales circle (to find some right angles).

I've found some code for drawing part of the circumference, so I've modified it to

(I'm using the calc library), but the compilation runs into errors.

(Yeah, I admit that I dont know much about the TikZ construction I've used, unfortunately.)

I've also tried to compute the radius by $(M) - (N)$ (which I've seen somewhere), but without success.

-> once \usepackage[czech]{babel} package is %commented, everything runs normally

edit2: I've used percusse's construction with cjorssen's "update" and it worked really fine. But now I've realized one problem - how coud I find that intersection with other line I've been talking about in first post? (summary: I've circle made by your way. There is also line, say, AB, which intersects the circle in two points. How could I detect them to draw that right angle for which I'm using Thales circle? Thanks in advance 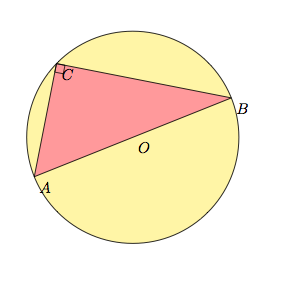 I've replaced one of the points with a random node. You can use the \n registers to do a calculation and use it on the path and also you can use a circle instead of the arc but I've kept the arc so that you can distinguish your own code from mine :) 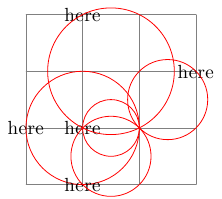 M is on the coord (2,1) but the N shows up as here text at each iteration.

When babel is used with the czech language, it makes - active. This makes tikz calc library unable to parse correctly the coordinates. That is why you get the error message

A workaround is to add \shorthandoff{-} before \begin{tikzpicture} and \shorthandon{-} after \end{tikzpicture}. Note however that you won't be able to use the babel feature related to - inside the tikzpicture.

16
Is there a better way to do intersections and calculations with relative coordinates in TikZ?
6
How to label or dimension a circle radius in TikZ?
4
Scale position of circle but not radius
3
Sampling uniformly inside a node
13
TikZ: Drawing an arc from an intersection to an intersection
6
How set TikZ circle radius in \node[circle]?
2
3D rotated coordinate system on the interaction point of a line and an arc in Tikz
2
Draw a circle with a fixed but unknown radius
6
Looseness for Bezier controls. Or how to bend in circularly symmetric tikz-drawings (without bend left, etc.)
16
Unit Circle and Circle of Radius R