Why does the space have no effect in this line of my code?

And it looks like this (the problem is the red-circled line): 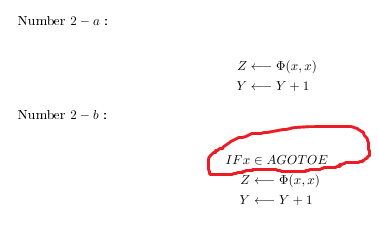 What should I do to make that line look like this where it looks more like handwriting where words are separated:

In math-mode spaces are ignored. (align as well as align*, equation etc. automatically swith to math-mode.) Just test $a b$: no space inside in the output. If you want to have spaces in math-mode, you could use explicit space (e.g. \␣ (slash space) or \hspace{1em}), but to get correct kerning and roman instead of italics format you should switch to text mode, i.e.

The \text command is supplied by the amsmath package which you already load anyway. Between A and GOTO there will be only one regular space, if more is needed the \hspace{1em} (in text mode!) could be used there.

spaces in math mode have no effect.

In math mode, every element of text is assumed to be a variable, and typeset as such : in particular, for this matter, variables shouldn't form "words", that's why the texing engine won't display spaces. However, it is possible to print text "as if non in math mode", but you have to tell latex that it should regard that content as text.

Amongst the various commands you may use :

In your example, this works, for example :

Note that as I said above, spaces are basically ignored in math display. So if you want your spaces to be taken into account, and your text to be separated from the rest of the sentence, you need to make sure the spaces are with the text, inside the braces.

8
Why is there a space in this equation
2
Why is the spacing for this completely whacky?
17
How to define the default vertical distance between nodes?
4
Adjusting the width of a displaymath environment
4
Why does using the amsmath package break the following code?
8
Why does \noindent have such an effect on \rlap and \llap.?
1
Where does this space come from?
4
Where does this vertical space come from?
2
Why my tabular does not have the padding
2
I have message that $ is missing in line of this code