I tried this example Place four algorithms (algorithm2e) in a subfigure and arrange them in two rows and two columns on two column documents. It doesn't work. The error message is

Is there anyway to go?

The code example is:

algorithm2e provides its own [H] float parameter, which sidesteps setting its contents as a float. However, in twocolumn mode, it produces an error. I'm not sure why. You can avoid this by setting \@latex@error to \@gobble temporarily. Using your example, I've added a \removelatexerror macro inside a \begingroup...\endgroup. More specifically, the definition

is placed inside a group, inside \myalgorithm:

Also, since you're spreading the 4 algorithms across both columns, it's best to use figure* rather than figure: 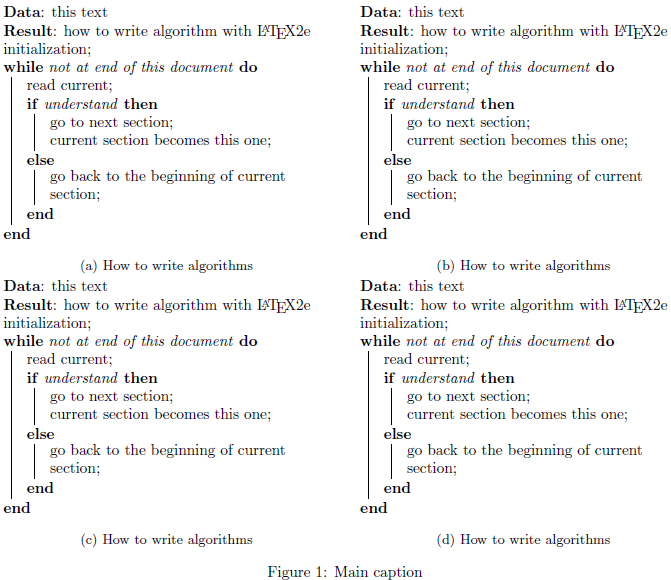 Obviously you won't be using \myalgorithm in your actual document. You could just place \removelatexerror inside each of the subfigure environments.

I had similar issues...

I simply removed [H] from the code as below.

Then the issue solved.

Not the answer you're looking for? Browse other questions tagged floats subfloats two-column algorithm2e or ask your own question.

18
How to use the algorithm2e package with IEEEtran class?
9
Place four algorithms (algorithm2e) in a subfigure and arrange them in two rows and two columns
1
Error: Undefined control sequence. \removelatexerror in ociamthesismain.tex
1
Side-by-side algorithms in two columns paper

7
How to put two tables in a table* element so that the tables appear side by side in a two column layout scientific paper?
10
LaTeX Error: File subfigure.sty not found
11
How to customize the number in the caption of an algorithm in algorithm2e
13
Caption spacing using algorithm2e
2
Help with algorithm2e formatting
2
how to put several images side by side in just one column in a two-column document
1
Subcaption environment failed. All figures containing a subfigure crashing all of a sudden
1
LyX to LaTeX conversion issue with [Figure] and [Subfigure]