How to draw an elliptical arc in TikZ given only opposite extreme points (vertices) of the ellipse?

Given two nodes (a) and (b), I would like to draw an elliptical arc from (a) to (b) whose major axis is the segment connecting (a) and (b) (the minor axis can be some arbitrary length). The main difficulty is that this ellipse's axes need not be parallel to the standard coordinate axes. Moreover, I don't know what angle the point (b) is at relative to (a).

What I have done so far is to, within a scope, shift the origin of tikz's coordinate system to the midpoint between (a) and (b), and change the coordinate x-vector to (a), with the plan of just drawing a plain old elliptical arc starting at (1,0) from 0 degrees to 180 degrees in this new coordinate system.

The following example is the picture I'm trying to draw with almost everything stripped away, but I left in how I am making the points (a) and (b) to illustrate why I don't know their coordinates. 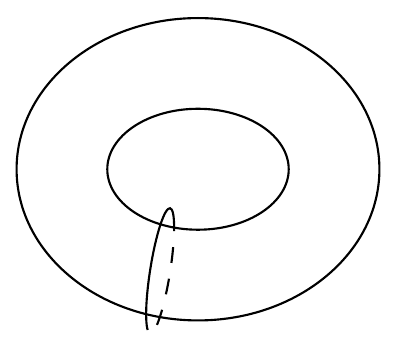 (I want the ellipse I'm drawing to lie within the annulus, i.e. each extreme point should be tangent to the inner or outer pieces, respectively.)

By way of comparison, if instead of trying to make an ellipse, I just draw a line from (-1,0) to (1,0) in my new coordinate system, by changing the contents of my scope to

then things work in the manner I want: 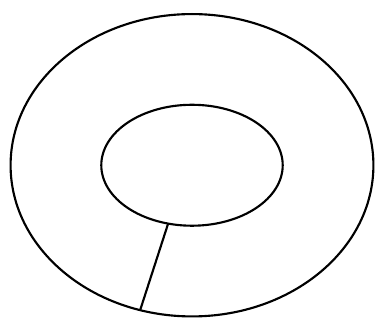 This works because it did not require using any y-coordinates.

I think that this problem is quite different that what the title implies. If you are are not doing these kind of figure often, you can just apply a scale=0.7 to yield the desired result: 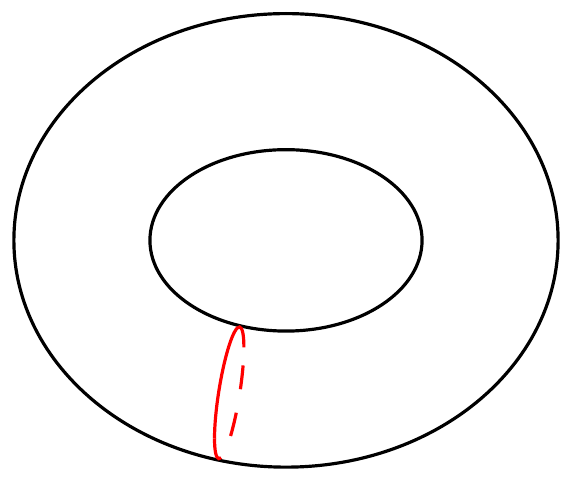 Here is my humble attempt from what I understood from your question. Warning: the code is ugly. Please clean to your liking.

The thing is you have to get the x and y coordinates of the points. To do this, I (shamefully) borrowed Andrew Stacey's \gettikzxy macro from Extract x, y coordinate of an arbitrary point in TikZ.

(the minor axis can be some arbitrary length). The main difficulty is that this ellipse's axes need not be parallel to the standard coordinate axes.

We can use a distance modifier

Here, 0.75cm is the dimension of the minor axis of the elipse and 90 is the angle it makes with the line connecting nodes c and b.

We also need to store the dimension of the semi-major axis and semi-minor axis. The following code snippet takes care of this.

To draw the ellipse, we use the \pgfpathellipse macro. The syntax is

where <first axis> and <second axis> are the axis vectors.

Putting it all together we get 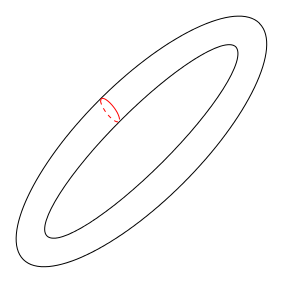 14
Rotate a node but not its content: the case of the ellipse decoration
16
Numerical conditional within tikz keys?
16
Define decoration with cloud shapes to resemble smoke
17
TikZ: Drawing an arc from an intersection to an intersection
3
A drawing for a trigonometric Identity (using the let-in syntax.)
9
Line up nested tikz enviroments or how to get rid of them
19
Problems drawing a sleeping duck
4
Draw a tangent vector to the circumference path
2
Creating split ellipse using tikz, arc