I am using LyX in order to write my thesis in Greek Language. When I press the preview button on LyX, everything is ok with the greek language on my thesis except the bookmarks on the side of pdf. They aren't in Greek ... although table of contents is in Greek.

I attach a screenshot in order to understand what's my issue: 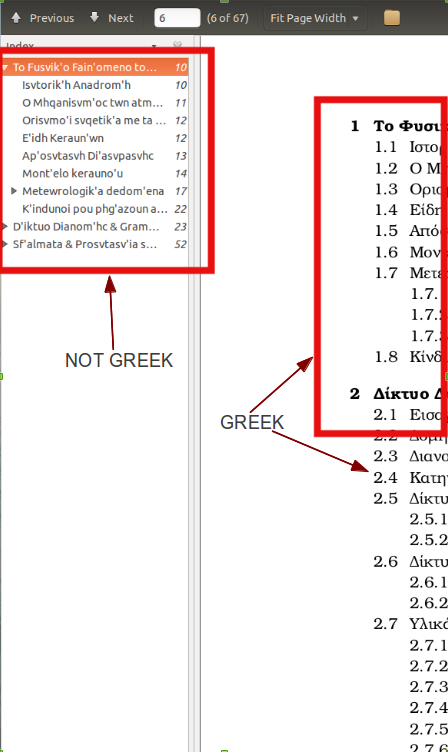 How can i fix this ?

The problem is that bookmarks do not know about TeX fonts. The Greek in the question is very likely based on font encoding, using Greek characters instead of the standard Latin alphabet and ligatures for generating accents. These are features of TeX's stomach. Bookmark strings, however, are simple text strings. Mainly only TeX expansion (TeX's mouth) is available for processing bookmark strings. Example, if the code for processing bookmarks in hyperref gets the character C, it does not know which font is used in TeX to typeset this glyph, neither it does know the language. Based on the features of font encoding and ligatures a string might contain many C, but meaning different glyphs.

Ways to get Greek bookmarks

Bookmarks strings can be encoded in PDFDocEncoding or Unicode. For Greek Unicode is needed (regardless of input encoding) in all cases:

Not the answer you're looking for? Browse other questions tagged lyx bookmarks greek or ask your own question.