How can I make a custom theorem for a definition?

Looking at the wikibooks article on theorems has me wondering... I'd like to do something, if possible, similar to the default "proof" theorem style, whereby I can add a custom name to each theorem as I go along..

Eample: In the wikibooks here, it says that if I use the following code, I get the opportunity to name the proof:

If I were to leave out the [proof of important theorem], it would just say "Proof:" instead.

I'd like to make it possible to define a definition theorem that always says "Definition #", but I can optionally add a name to it so it may say something like "Definition 3.1 - The answer of the universe and everything", followed by the definition in question.

Right now, this is all I have. I don't know much about TeX yet as I'm just learning it now.

All theorem environments support an optional argument for a theorem's name or a note. In the following example, I use the thmtools package to format the note. (The amsthm package still provides some underlying functionality, but I prefer thmtools' key-value-syntax.) 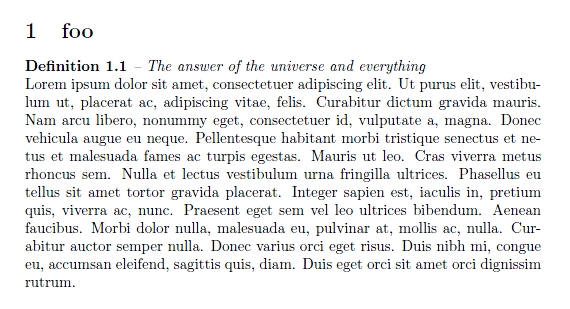