I'm using MiKTeX 2.9 on windows7. When compiling with pdflatex, I get the following warning from Babel (which is discussed elsewhere

No hyphenation patterns were loaded for the language):

The suggestions elsewhere (and in the MiKTeX manual) say to use MiKTeX Options (mo.exe, I assume), to update the language.

The response I get is: "This language is not yet available" 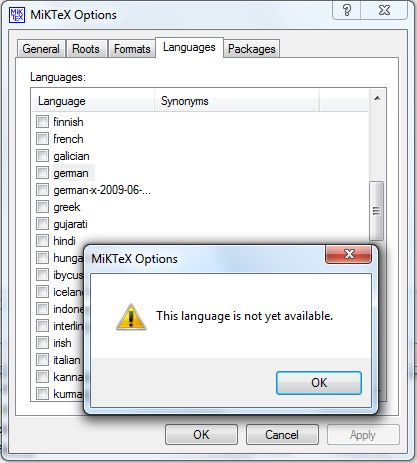 Above is a screenshot from my system. Languages which are not present do not have check marks in their corresponding buttons. When I click on a button - any button, I get the message box.

I assume that the screenshot below (from Speravir) shows how this dialog normally functions: 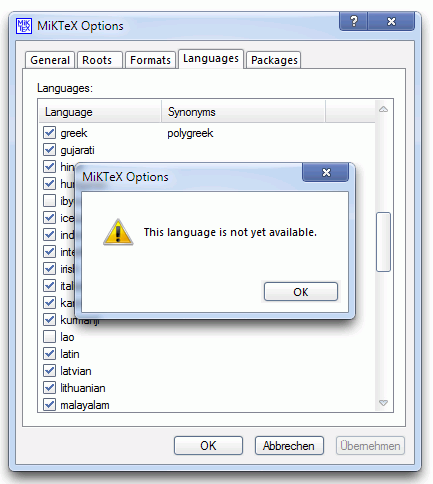 How do I make a language available?

First, I attempted updating my "language.dat" file. But then, I noticed this gets updated (silently) whenever I update the fndb via mo.exe. The update simply overwrites any edits with an empty file. So, editing the file is pointless (and something I know I shouldn't be doing since it's under the texmf directory tree).

Second, following Ulrike's suggestion in a comment below, I've reviewed the file 'languages.dat' in the miktex config directory. (The first line says "Do not edit" - there's no clue on how it gets generated, or how to edit.) The languages I want at this moment (english, german, french) do not have an 'exclude' attribute. In fact, the entries are as follows:

all other languages have:

Does a different attribute tell mo.exe to enable the button for a language? How do I set it?

I found an entry in the official MikTeX Bug list (via source forge), originally from Ulrike Fischer. So people should click on Ulrike's comment to give her her due.

Later in the discussion forum for MiKTeX user “Tethered.Sun” wrote:

Using the command line program initexmf does the job of adding the desired hyphenation patterns. As of this writing, the bug reported above remains outstanding.

So I'll use the command line tools in place of the gui.

Not the answer you're looking for? Browse other questions tagged packages miktex languages or ask your own question.