One of the features I really valued in pstricks (I have long changed to tikz and this is the only feature I am missing) is that I could just designate any fragment as a node and then connect that to other nodes I had lying around.

Here is a specific example I came up while converting legacy code for my lecture.

But I am cheating in the last two lines of the picture. What I really want to do is to link the boxes in the nodes aform and eform to the node love. In pstricks I would just have used the \rnode macro and done something like

I have tried various things, e.g. using \tizk[remember picture]\node (abox) {\Box}; but nothing I came up with worked. I would be grateful to learn how to do this.

It's the lucky case where you can use labels since the boxes are at the end but otherwise you have to chop the text into different nodes (or use more labels). 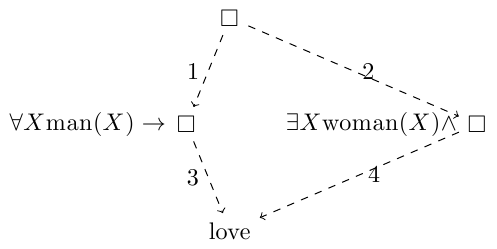 Update tikzmark is now available on CTAN and contains this \subnode command.

The latest version of the tikzmark package (currently available in beta form from the TeX-SX Launchpad page - download tikzmark.dtx and run tex tikzmark.dtx to create the necessary files) has a \subnode command which ought to do what you want. The syntax is \subnode{<name>}{<content>}. What it does in effect is to create a tight-fitting rectangular node around the content with name name. How it does this is not so important except that you need to use the remember picture key on the picture in order to refer to this pseudo-node and it takes two runs to settle down. If you want to have a usual node, or a different shape, then use the fit library to put one around it, as in \node[ellipse,fit=(othernode)] {};. The fact that the pseudo-node is tight-fitting means that this will be the same size as it would have been had it been created in normal circumstances.

This is experimental code, so please let me have any feedback on its usefulness or unexpected behaviour.

The above produces the following for your diagram (commenting out the other parts):

14
Anchors/coordinates inside a node's text
8
Can TikZ emulate PSTricks' inline \Rnodes, scattered along a complex equation?