Possible Duplicate:
Show inline math as if it were display math

Whenever I try to get something below the product character, it actually puts it next to it.

The recommended code to do this is \prod_{n=1}, but contrary to the example, for me, it looks more like Nn=1 than actually below the prod character.

It does not mention a specific package though.

How can I do this?

In textstyle the limits (the n=1 in that case) are pushed to the right of the operator, while in displaystyle it is above and below.

In any case, you can use {\displaystyle \prod_{n=1}^{\infinity} a_n} to locally force the display style. Do it at your own risks, as the formula will become much taller, and is likely to break the appearance of your paragraph.

If you'd prefer a compromise, you can use the \limits command to force the limits to be placed above and below the operator, without changing the operator size (which \displaystyle does). Beware, even if the operator isn't resized, the limits will still enlarge the formula a bit and add to your line spacing.

In my humble opinion, these options are worth knowing, but should be restricted to cases where the formula has to appear correctly inside of a fraction or matrix. For inline formulas, the default text style is okay. 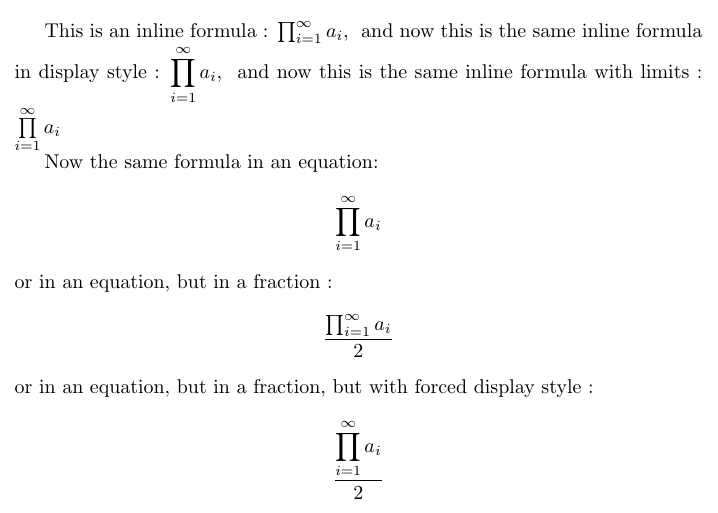 11
Defining a macro for “real” colored delimiters
5
How to make math symbols like \prod smaller
10
(resolved) A conditional independence symbol that looks good with \mid?
4
How do i use a cyrillic glyph/symbol/character in a math formula?
3
Font-independent custom symbols
3
How to get slender \prod symbol in display mode
1
Custom textoverset, align letter bases