How can I put a coloured outline around fraction lines?

I use the contour package to put thick white outlines around labels in graphs, so they remain readable above the grid lines without taking up too much space.

Unfortunately, the package is not able to draw outlines of the horizontal lines used in fractions or root symbols when the [outline] option is active (which is used to generate 'proper' outlines instead of multiple copies of the text).

Is there a different way to generate coloured outlines of equations? Maybe something using pgf?

This is what happens with the contour package:

Generated with this minimal working example:

Knuth in the TeXBook gave an example of "poor man's bold," (The TeXbook, p. 386) which can be typeset obtained by overprinting the normal weight symbol with slight offsets.

The results are somewhat fuzzy, and they certainly are no match for the real thing if it's available; but poor man's bold is better than nothing, and once in a while you can get away with it.

Here, one can use a similar technique and the code is shown below:

To achieve the best results possible one has to kern in small steps for possibly twenty steps or so. For simplicity, I have not done that. In the final version, you need to adjust the colors to suit, possibly changing the shading to white. 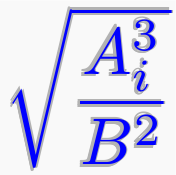 After reading Jan's comment below I read the manual and true, as the commenter said the easiest way to achieve what the OP wanted is to include the package without an option i.e., \usepackage{contour}. Helps to RFM!

If you can use ConTeXt to draw the labels (depends on how the figure is generated), then you can access the path of the label in metapost and manipulate it as you want. For example, look at the metafun manual, section 8.6 (in particular pages 367 and 369.

Not the answer you're looking for? Browse other questions tagged tikz-pgf color decorations or ask your own question.

60
TikZ: halo around text?
32
How to change color of edge of characters?
7
How to avoid unbreakable \pmb boxes when typesetting math?
6
Can I make a greek letter extra-bold in math mode?
3
How do I use pdfliteral with tikz?
1
Tikz pgfplots: Label-customised graph clearing whenever a label is intersected
1
Making everything in the document thicker

6
How to put a mark on an arc (tikz,decoration)
5
How to put fixed-height shading around text (inline)?
21
Coloured shadowed boxes around equations
0
Tikz takes forever to compile when imported into main file
1
How can I make a coloured footrule using fancyhdr?
2
Drawing a box with \rule: can I add a black outline?
2
How can I put only the left and right lines in red in a command?
6
How to get contour/outline/"halo" around TikZ drawings?