Lets say I have the following LaTeX code

I find that even after formatting it like this with a new line after each inline math environment it gets pretty unreadable after a while. I find that for texts that are full of math, in general, it is really hard to produce readable code.

Is there some best practices how to write more readable math in LaTeX?

I there something like LyX but with the possibility to write pure LaTeX and have commands being processed in the editor. Like if I write \textbf{b} then b would show as bold and the \textbf{} part would disappear. The when I hover with mouse over or place cursor behind b \textbf{} shows up again. Maybe this is possible with LyX?

Most of what I say is covered by other answers, but I will write here my thoughts.

First of all, if you write a lot in LaTeX format, I think you should leave LyX and go for any plain text editor. In the (near) future you will be faster (reading and writing code).

About writing readable code. Here are some tips to make it readable:

This is how I would write your code:

After that, I think you should differentiate writing code and fastening your input. Most of people defines commands to write faster (like \newcommand\vx{\vec x} from Niel de Beaudrap). I don't agree with that. To write faster you should use an editor (or a third party app) which lets you create snippets (i.e. I would make a snippet with \vec{x} which would be called when you type vx).

At last, to fasten your code-reading you must use a program which shows your code with colors (a color for math, a color for commands, a color for text,…). This is an example of my code (the theme and font I show here is not the usual, but I'm not in my main operating system, however I don't hate this setup): 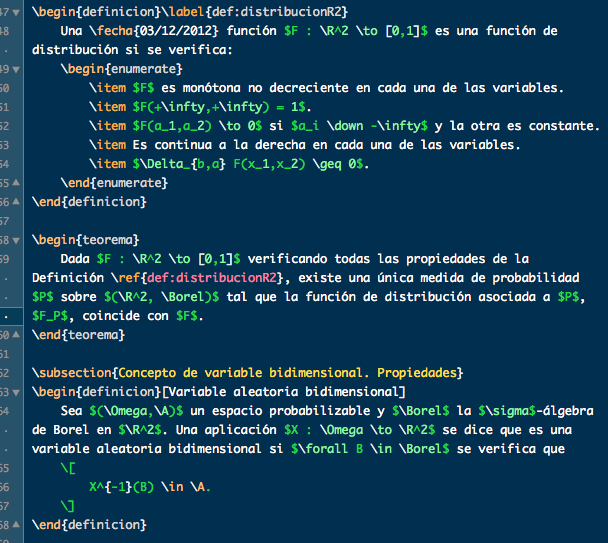 These are my ideas:

There probably are editors that do the kind of textual substitution that you describe (emacs on your example already makes the section heading in a different font, although it doesn't hide the \subsection markup, it clearly could given sufficient lisp definitions).

Perhaps I'm just an old Luddite but I find the font changes in the editor distracting and certainly if the editor starts hiding markup it seems simpler for simple things but for anything more complicated, or if things start to go wrong it makes things a lot harder to understand as you are never sure if what you are seeing is what is actually being processed.

What can help is to give more semantically relevant names to the markup so that it reads more naturally. Here I think you are using calligraphic to denote sets, blackboard bold to denote the common number fields, and upright bold (I prefer bold math italic myself) to denote vectors. so after some simple definitions such as

You could have a perhaps more readable source

Of course, there are many variants, if you don't have too many sets you could define \S to be \mathcal{S} and use \S instead of \sets{S} or whatever you find most natural.

In addition to Davids answer, you can use unicode with Luatex to make the code more readable. I know that this is difficult to input, and therefore not suitable for everyone, but I wanted to show what is possible:

Edit: As pointed out, the boldface x is U+1D431 𝐱 and the calligraphic S is U+1D4aE 𝒮. You can then leave out the command definitions, and write:

I personally use emacs with AUCTeX and fold-mode. AUCTeX renders math, figures, and titles and shows them exactly as they will look like in the final document. All you need to do is the type C-c C-p C-d to generate all the images. When your caret moves to a generated images it is converted back to text so you can edit the LaTeX.

This is what it looks like when editing a generated image with AUCTeX:

For things that AUCTeX doesn't handle, like plain text \emph{}, \cite{}, enumerate (and friends), and \ref{} (and others) I use fold-mode. fold-mode can work alone if you do not want to use AUCTeX for full rendering. When used without AUCTeX It will handle titles and footnotes (previously handled by AUCTeX) and will use unicode characters for math symbols; you can see the letter \lambda and \in in the screenshot.

The "[c]" is a hidden citation, hidden by fold-mode, to see or edit it just move the caret to it. Same for "[f]" which is a hidden footnote by fold-mode, while with AUCTeX it is given its proper number "1" as displayed in the second image. The green italic "convex" is "\emph{convex}", rendered like this by fold-mode.

I do a lot of my early draft writing in LaTeX, so I place a substantial value in being able to quickly read my own LaTeX code.

As a result, I adopt a style which is half-way between the "LaTeX way" (of using the correct delimiters for math environments and semantic names for macros) and quick-and-dirty macro usage (to save not only on keystrokes made, but on characters to re-read). The following is a typical way that I would render your code-segment.

I don't bother adding newlines in the middle of sentences, except for things such as footnotes and ends of lines (which is useful to do if you use a content revision system to track changes). But I add them liberally in my displayed math to better reveal the structure of what I'm writing, especially in tabulated environments such as align. You could also just use an equation environment instead, in which case I would write:

Some further remarks on my approach to defining the macros:

Use such shortcuts with discretion, both for your own sanity and those of your colleagues who might also work on the document with you.

One interesting option could be using Unicode symbols, e.g. ∫ instead of \int and ℝ instead of \mathbb{R}, and use \DeclareUnicodeCharacter.

There's the neo keyboard layout (German site, sorry) which offers six layers (instead of the usual two switched via shift), one of which serves to input the most common mathematical symbols:

The disadvantage is that the layout also remaps your Latin letters (it's an attempt to improve German typing, similar to Dvorak). But you can see this as an inspiration to modify your QWERTY (or whatever layout you prefer) to include this additional layer. (Sidenote: You can create Windows keyboard layouts with MSKLC)

The neo-layout website also has a German wiki article on how to set this up with LaTeX or XeTeX, and they provide the uniinput package for the mentioned \DeclareUnicodeCharacter of probably all relevant unicode symbols (including e.g. greek letters).

update I figured out there actually is a Unicode block Mathematical Alphanumeric Symbols including bold letters so you could write 𝐱 instead of \mathbf{x}. Typing that could be implemented via a deadkey, e.g. AltGr+b followed by x. So your example could be input as

which looks pretty readable to me. (I took the liberty of replacing your for all as well)

As a extensive LaTeX user, who handles most of the texts under version control, I have found that it is useful to structure my writing so that editing is mostly shuffling lines around. Text editors have special commands for this, and it makes e.g. differences between versions (as given by the version control system) really show differences, not artifacts due to reflowing a paragraph after adding a word). Keep ideas together, go to a new line on all (most?) punctuation. Keeping article/adjectives/noun on a line makes the use of tools to check for correct usage easy ("a adjective" is easy to spot if on a line, if it spans lines it is hard to search for).

This answer got bumped to the front page again, so, an update.

I don’t actually do this, but as of 2020, unicode-math allows you to type in many Unicode symbols directly into your source, e.g. 𝒮 (U+1D4AE) for \mathcal{S} and 𝗯 (U+1D5EF) for \mathbf{b}. If you use this style, you should load \usepackage[math-style=literal]{unicode-math}.

Not the answer you're looking for? Browse other questions tagged math-mode lyx best-practices or ask your own question.

360
Are \( and \) preferable to dollar signs for math mode?
223
How to write ceil and floor in latex?
120
Are there any coding style guidelines for LaTeX?
37
Markdown vs latex for thesis
10
What are good packages / techniques for writing more readable LaTeX *code*?
12
Are there any downsides to using macros to avoid typing accents?
8
vim latex-suite: unwanted in-editor math symbol conversion
3
Defining Commands With Multiple Meaning
3
Automatic style guide for LaTeX?
3
Break the line in array mode
See more linked questions