parenthesis around underbrace too big

I have the problem that I want to have an equation with underbrace but the surrounding parenthesis shall not include the underbrace, i.e. should have the size as if the underbrace wasn't there. Here is the code I use:

I'd like to have that the outer parenthesis have the same size and center as the parenthesis of the pmatrix. I tried \Bigg( but it looked slightly off and it only works for 2x2 matrices but not for 3x3. Any ideas?

this is overkill for a 2-by-2 matrix, but it would work for larger matrices as well, even for ones where big versions of parentheses aren't available.

observe the use of \! to get rid of some unwanted horizontal space.

Maybe I shouldn't have posted this but I'm reviewing a lot of papers involving huge matrices and I can't stand inline matrices. If needed use the smallmatrix environment or state the matrix exponential as $e^{\gamma A}$ and put A matrix as a display math. 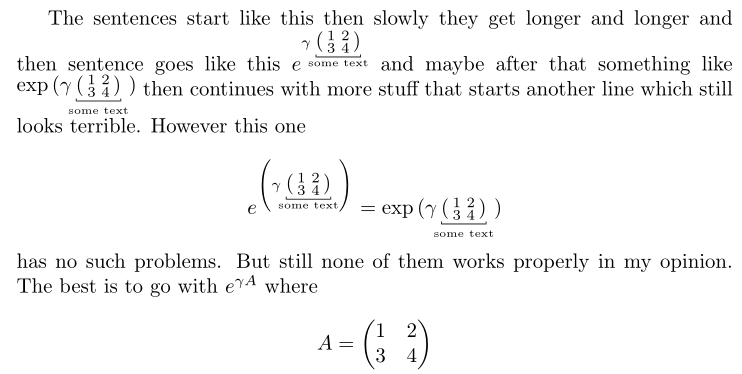 If you need it only once, I would go for a manual adjustment:

I put the \underbrace outside, and using \mkern with positive and negative value I made it think that its contents is smaller. The values 30mu and 18mu were found by trial-and-error.

Again, overkill; but, for what it's worth, here's a tikz solution that appears to work.

The primary difficulty here, as elsewhere, was getting the underbrace and its text to count for vertical spacing, but not until after the outer parentheses were set. The tikz solution I initially had in mind was to save the position with tikz nodes in the middle of the math, and then come back afterwards with an underbrace at the saved position. The trouble with this approach is that tikz constructions that reference positions from other tikz pictures are supposed to be given the overlay option, which effectively smashes any effect the construction would have on the vertical spacing (and would make the next line too high).

Not the answer you're looking for? Browse other questions tagged spacing amsmath or ask your own question.

19
Underbrace under sqrt content
6
How to deal with the size of the exponential type function's argument?
12
Curly brackets around a table