Simple way to place an array of symbols above a letter?

I would like to typset something similar to the symbol used for the "generalized spherical harmonics". This involves placing an array of dots above a letter. The array will have two columns, and the number of dots in each column can be different. I have tried the following, but it looks awful:

I would rather not have to fiddle with the array spacing manually, is there any way to do this simply? If not, how would I do it at all (even if it requires manual array spacing)?

An example of what it's supposed to look like can be found here (its the T symbol with the dots above it, but it shouldn't look like a triangle, it should distinctly be two columns with two dots on the left and one on the right):

Here is a possible way

I have defined only three combinations, you can say \gsh{.&.&.&.} for getting four dots (or define \gshfour). 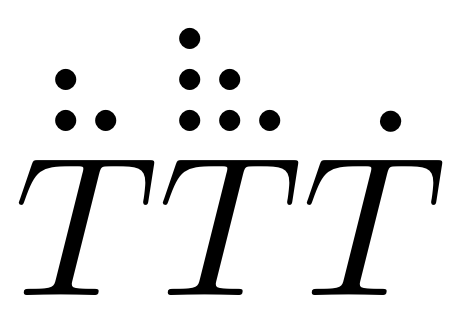 You use \gshsym for "short" superscripts that don't go beyond the letter to which they are overset, \gshsym* for wider superscripts.

Not the answer you're looking for? Browse other questions tagged math-mode formatting accents or ask your own question.

15
Using LaTeX to render hypergeometric function notation
41
Upper triangular matrix with big zero in lower triangular?
1
Triangle inequality symbol
5
accent above a greek letter
3
Is there a cleaner way to get the proper spacing in this alignedat?
1
Group multiple arrays
2
Awkward vertical space in tcolorbox with tikzpicture
3
Vertically align padded matrix with different rows
1
How can I denote column and row names in a matrix and align equations with that matrix?