Creating a shaded box with an outline

I don't understand floats very well. I've been using the framed package instead, which is nice because I can easily put a frame around something. There is another behavior included in this package that I'd like to combine. It gives the option to create a shaded environment, which is another way of saying that it changes the background color of the object that I'd like to put a frame around. I really like this, but the edge of the shaded area looks unpolished. So what I'd like to do is to create a float that has a special background color, and I want the edges to have a thin line between the special color and the normal white background that I use for the rest of the document.

I'm using these framed "floats" to display mainly text, so I'd like to know how to combine all of these features. In other words, I'd like to see an example that takes a bunch of text, and gives it a special background with a box that is perfectly aligned at the edge of the background (thus giving it a nice frame). I'd like to see how this can be implemented as a float, as well.

One more thing that isn't necessary, but would be good to know, would be a way to implement similar behavior around an align environment. I don't know if this would require special treatment, but I'd really appreciate it if someone could show me how to do this. 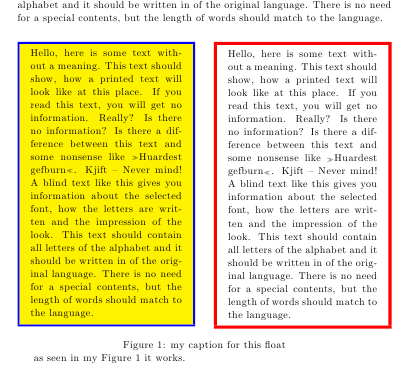 mdframed package is a good suggestion. Also, take a look at this example.

Not the answer you're looking for? Browse other questions tagged floats boxes framed or ask your own question.