Ask Question
Asked 10 years, 5 months ago
Active 1 year ago
Viewed 800 times
9
This question already has answers here:
How do I find out what fonts are used in a document/picture? (5 answers)
Closed last year.

Does anyone know what is the font used in Mumford's Geometric Invariant Theory? If yes is it available as package in LaTeX?

PS: Look up the book in Google books. Note that the final chapters which were added later are typeset with CM fonts.

The font is Monotype’s “Old Style Series 2” which was one of the main fonts used for mathematical publishing along with Monotype Modern 1 & 7, Imprint, Times and Baskerville (in the US, one could also add Monotype Modern 8 and Century Schoolbook). Here’s a showing of the alphabet in the Monotype Mathematical Sorts List booklet by Arthur Phillips (1956): 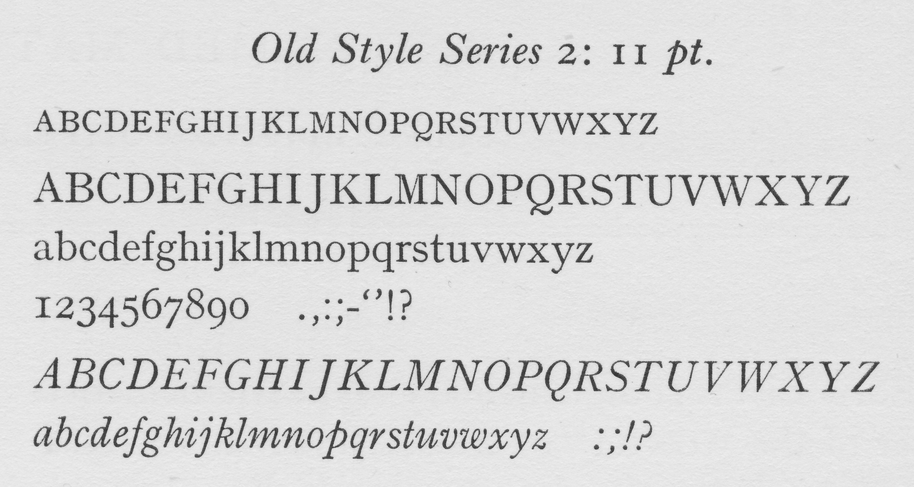 You’ll notice that the italic f  is different, but it was quite common at the time to substitute an f  without kerns to ease the setting process. As often, they also used a generic set of numbers (from Monotype Modern, probably) which does not match the font.

Here’s a close-up of some characters from Mumford’s book (page 34) which are typical of Old Style Series 2 and allows to identify it:

Monotype did a digitalisation of it as Monotype Old Style, but there’s no LaTeX package for it and no companion math font.

I suggest to use identifont.

120
How do I find out what fonts are used in a document/picture?
5
How to identify and install a specific math & text font?
0
Ask for font in LaTex