I am trying to use the same numbering for theorems, propositions, definitions, etc. This is normally easily be solved by using amsmath and defining these environments and using the same counter:

In my case, the document class is:

Just found the very simple solution inspired from How to identify the counter of Equation, Theorem, and Section. The solution is to match the counters:

The definition of these environments in svjour3 are actually initiated using a "special theorem macro" that just receives a bunch of formatting (plus counter and name) information from the respective environments. Originally, theorem, proposition and definition are defined like this:

All you need to do is make the proposition and definition environment starting macros to resemble that of theorem: 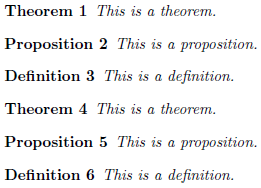 The svjour3 class uses a different command for defining new "theorems", but doesn't require it. If you pass the nospthms option, none of the predefined theorems will be defined.

Alternatively, if you want to use the toolbox offered by the class, you can undefine the predefined environments:

Not the answer you're looking for? Browse other questions tagged numbering environments counters sv-classes or ask your own question.

2
How to identify the counter of Equation, Theorem, and Section
1
Make algorithm2e use existing counter

4
Should theorems, propositions, conjectures, etc. share a common counter?
1
Numbering theorems as subsubsections
7
Numbering Theorems/Definitions together, by section and without section symbol
15
How do I use the boxed theorem name as a QED symbol
4
Theorem/Definition/Lemma problem — Numbering in Beamer
6
Problem with numbering theorem by section
1
Changing the numbering in appendix
0
Organize counter (newtheorem)