When using some other editors, when you type two spaces with your space bar, two spaces are effectively displayed. This is not the case in LaTeX (btw, that's not the case on these websites ;) ).

My question is barely simple I guess, but I didn't found some information about it on Google.

How to display two consecutive spaces in LaTeX (I mean two spaces horizontally, with the space bar). 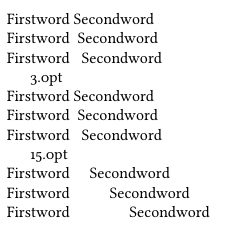 {} gives you an empty word, so you could put one in between each space:

Or, if they must be nonbreaking, use ~ for a non-breaking space

You don't want to typeset two consecutive spaces, in general. If your aim is to have larger space after periods, it's already built in TeX:

Note that \frenchspacing is not the default, so we have larger space after the period in the first line.

According to TeX's rules, a normal space is inserted, with an additional space with a value set for the font, because the \sfcode for the period is 3000 (greater than 2000); in the Computer Modern font the extra space is one third of the normal interword space.

If you really want a double space after a period, you have to change the font parameter, which is not an easy task because it should be done for every font in the document.

Here's how one could do, but please, don't.

If you instead want to occasionally have a double space (also Knuth uses them somewhere in the TeXbook), use <space>\<space>:

0
How do I add space inside \textrm{}?
6
monospaced fonts not respecting spaces?
2
uniform spacing between words and sentences

6
More than one width of a glyph in LaTeX or LuaLatex
22
Usage of LaTeX macro \space (compared with \␣)
2
Vertical spacing for two consecutive figure environments
5
Stop LaTeX adjusting vertical spacing when fitting more text onto a page
0
Overfull and underfull boxes when using twoside documents and fancy headers
2
Space between lines within fancy header or footer (after adjusting font size)
3
underline (empty space) until end of line (manual “fill in the blank” to end of line), within enumerated environment
14
Understanding LaTeX 2e's \@esphack