After trying both commands, I noticed that \hspace* opposite to \hspace will insert a space over the end of the line.

So I was wondering if someone could explain how that works and also when to use either command.

Spaces (glues and kerns) disappear after line breaks by rule; by the same rule, line breaks can happen only at the "left edge" of a space. Moreover, if one says \hspace{1cm}\hspace{1cm}, the first \hspace is a feasible break point, but not the second one.

This is how TeX attains alignment to the left margin for normal and ragged right paragraphs (ragged left uses a different feature).

More precisely, a glue (\hspace) can be chosen as break point only if it is preceded by a non discardable item (most commonly a character or a rule). Among discardable items are penalties.

In some cases one wants to have spaces that don't disappear at line breaks: for instance blanks that should filled by hand in an exercise. Thus LaTeX provides the \hspace* variant.

When \hspace*{1cm} is called, LaTeX uses the internal command \@hspacer, which does

Thus \hspace*{1cm} forms, so to speak, an indivisible unit that will never be taken as a break point, nor will disappear at line breaks.

A consequence of this rules is that a space after \hskip*{1cm} cannot be used as break point.

Suppose we want to define a \blank macro for leaving space to be later filled in by hand:

The result will be 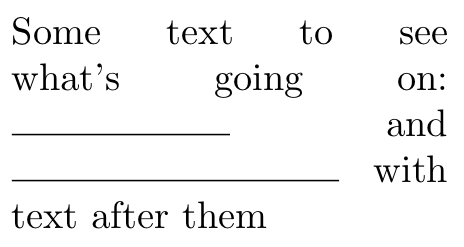 (where the rules represent the \hspace*{...} commands; they won't be printed by this command, I used them just to show the effect). You can see that the space after \blank{...} is not used as break point.

With a different definition, the blanks can appear at the end of the line:

Of course the typesetting here is suboptimal, but the point is to show how the thing works.

The \linebreak[0] command just inserts a feasible break point, without stating any particular preference for it.

For the interested readers, the "rule" effect for showing \hspace* has been obtained with the following trick:

Not the answer you're looking for? Browse other questions tagged spacing starred-version or ask your own question.

0
Create an indent in an algorithm (without using the algorithm environment)
12
Maximise vertical space between subfigures with \subcaption
12
Is `\hspace*` equivalent to `\strut\hspace`?
6
What internal command(s) does \hspace call?
4
flushright with hspace
2
How to fit large sideways table with Equations/References on A4?
1
Header rule doesn't pass over the margins
1
I need to shift multiline equations as per attached image
1
center align 2x2 plot of subfigures

16
Strange spacing when putting a math macro before a binary operation
6
Extra space after new command using xparse
12
Negative phantom
7
how to space after LaTeX3 commands
9
What's the difference between \mspace and \hspace in math mode?
0
Adding {} at the end of a command vs xspace
5
Non-breaking \hspace in ConTeXt