Changing the indentation of a Tikz tree

My question is: how can I reduce the indentation of the child nodes?

Currently the anchor point comes from the south of the parent node which means the tree becomes large horizontally very quickly. I do not wish to use the parents' west as the anchor point. Ideally a point between the two would be better so the output looks like:

Any thoughts much appreciated

Let's provide a different example which shows better your problem: 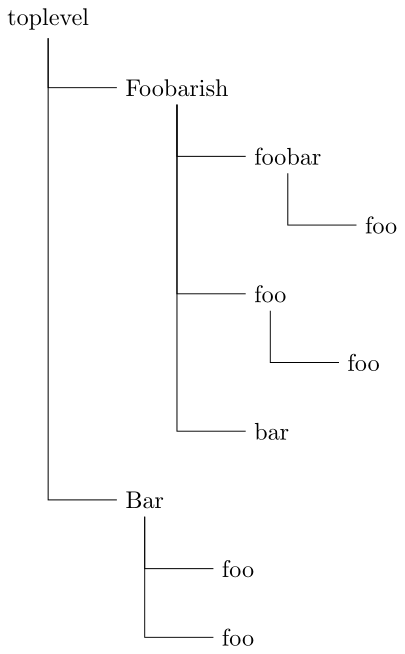 This shows not only the issue you mention, but also that the vertical stems in each branch are not aligned (the branch from Foobarish is not aligned with the branch from Bar). This problem will be also solved with a proper parent anchor (and growth parent anchor) which does not depend on the size of the parent. In this case south west is the best choice.

The following style solves all these issues, and provides a very compact version of the tree.

Thanks to Andrew Stacey and Jake for their useful comments about the need to set also growth parent anchor (their comments below refer to an early version of this answer).

31
Drawing a directory listing a la the tree command in TikZ
19
nodes structure like file system
2
Tikz tree indentation
4
Trees in latex : 2 nodes on the same line with tikzpicture

7
Aligning TikZ trees with other nodes
1
Define tikz node based on pagenodes
16
Numerical conditional within tikz keys?
6
TikZ/ERD: node (=Entity) label on the inside
2
Tikz tree indentation
2
Tikz-tree, label the roof
7
Radial node arrangement in Forest
6
How to color tikz mindmap nodes by y-coordinate
2
Changing the orientation of a tree
3
Document header with tikz