TikZ: anchors of special node “current page” seem to be incorrect in landscape

I've got a document that I wish to format in landscape in conjunction with some material added as an overlay via TikZ. I can get everything correct if I create a portrait page, but not if I create a landscape page.

But when I try to get the same effect in landscape, the .south west anchor is apparently off the page. This seems to happen regardless of whether I pass landscape through the optional argument to the class declaration or through geometry.

Following @HarishKumar's suggestion, I can see that my compilation route is part of the problem: I'm compiling by: latex → dvips → ps2pdf instead of just pdflatex. However, I was under the impression that I need to go the more round about way if I'm incorporating PostScript commands in my LaTeX document. Does anyone know anything about this and care to explain why I should always use pdflatex?

I'm a bit hesitant about calling this a bug in pdflatex, but from my not-very-extensive investigations, it would appear that the position returned by the primitive \pdfsavepos is offset when in landscape mode and producing dvi. One way to explain the behaviour (though I've no idea how accurate this picture is) is that it is as if when \pdfsavepos runs then it actually computes the coordinates relative to the bottom left of the page. But TeX wants the coordinates relative to the top left so then pdflatex has to compute (0,paperheight) - (saved x, saved y) and return that via \pdfsavepos. However (still conjecturing) it's as if pdflatex when running in dvi mode does not know the actual page size of the shipped out page. So when it computes paperheight then it uses its "standard" paper height. This is based on the fact that the difference in the recorded positions in the aux file between a run with latex and a run with pdflatex is precisely \paperheight-\paperwidth:

And (in landscape mode) we can compare that with the paper dimensions via:

This explanation can't be completely right because although I get a similar story (in that there is a consistent y-shift) when I try \usepackage[a5paper]{geometry} then the numbers don't add up in the same way.

For situations where one is going between two tikzpicture environments then this offset doesn't matter because it is consistent, and therefore the relative separation of the pictures is the same. It only matters for the current page node as that is "absolutely" positioned. To fix the current page, it suffices to fix where pgf thinks the page origin lies. This is held in the macro \pgf@sys@pdf@mark@pos@pgfpageorigin so we need to redefine that.

Ideally, we should redefine it to be aware of the current page size and geometry but as my experiments with a5paper showed me, I don't fully understand the computation involved. So here's the fix for landscape a4paper when set using the geometry package. If doing a mixed document, you could make the macro itself contain the conditional. By surrounding it in \ifpdf ... \fi we get a system that works for both latex and pdflatex.

In an adaptation of your MWE:

With pdflatex this produces: 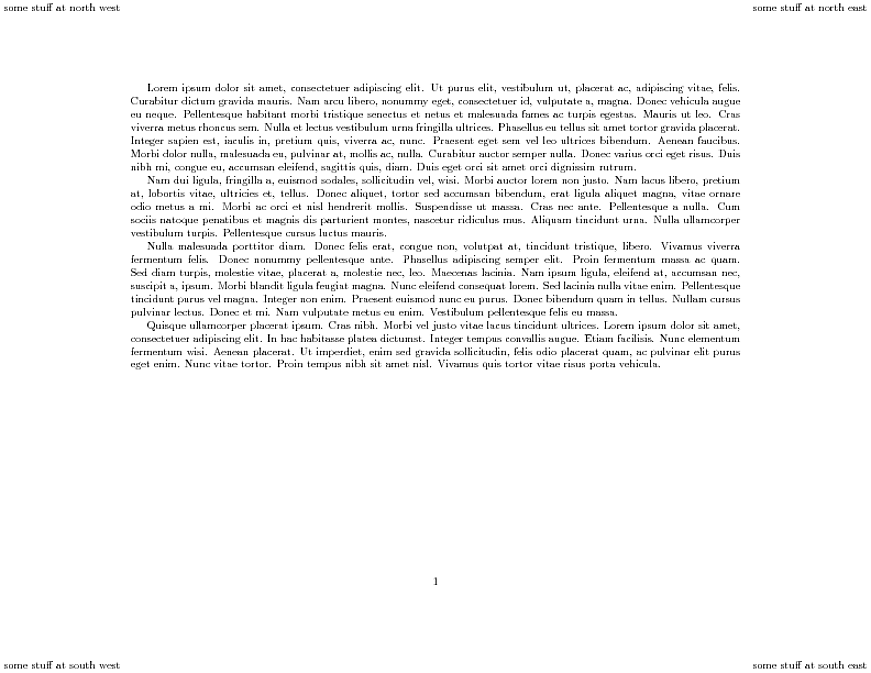 With latex; latex; dvips; pstopdf (note the double run of latex) this produces: 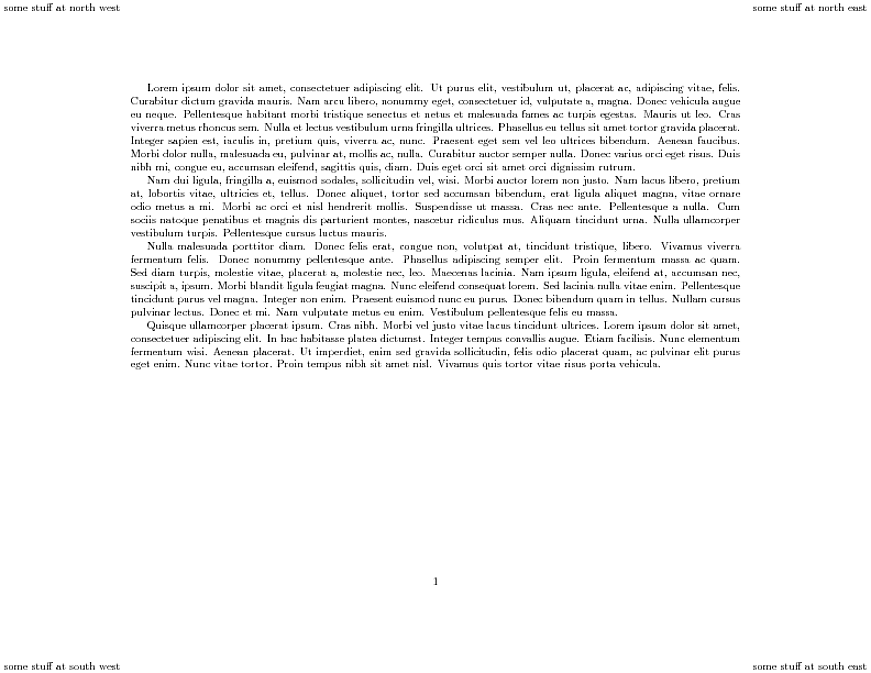 pdflatex (and also lualatex) relies on the value of \pdfpageheight to calculate the position, but geometry doesn't set this value if the dvi-mode is used. If you adjust the lengths the nodes are placed correctly:

Not the answer you're looking for? Browse other questions tagged tikz-pgf nodes landscape or ask your own question.

1
Trying to fix (or workaround) bugs that affect color-filled headers when going through DVI
84
How to use PSTricks in pdfLaTeX?
3
How can I maintain the current page nodes for portrait when temporarily entering landscape mode in TikZ?
9
pdflscape and tikzpagenodes problem
2
Complete 3-part header from fancyhdr inside a single colored box
3
Changes in the \pdfsavepos offset across MacTeX versions when in landscape through dvi

11
How to define the default vertical distance between nodes?
6
TikZ/ERD: node (=Entity) label on the inside
7
Why do I get an extra white page before my TikZ picture?
3
How can I maintain the current page nodes for portrait when temporarily entering landscape mode in TikZ?
13
TikZ: Drawing an arc from an intersection to an intersection
9
How to prevent rounded and duplicated tick labels in pgfplots with fixed precision?
12
Drawing rectilinear curves in Tikz, aka an Etch-a-Sketch drawing
9
Line up nested tikz enviroments or how to get rid of them
3
How to draw a square and its diagonals with arrows?