How to automatically adjust the emdash length according to current language?

In Russian typography the emdash, which is typed as the ligature --- in LaTeX, is 20% shorter than the standard emdash. The babel package cares this difference so that --- prints a shorter emdash if russian is the current language. However this switch mechanism works only for latex.exe engine whereas lualatex.exe and xelatex.exe type long emdash in any case.

This is because under LaTeX \selectlanguage{russian} switches current encoding from, say, OT1 or T1 to, say, T2A. As a result latin emdash comes from, say, cmr font family, whereas russian emdash comes from LH fonts (as a rule). Under LuaTeX or XeLaTeX \selectlanguage does not switch current encoding (it remains EU2 for LuaTeX or EU1 for XeTeX) so that --- always came from same font.

Note however that most fonts contain dashes of different length and, thus, it is possible (in principle) to map --- to different code points depending on the current script.

My question is: how to do that using instruments provided by the fontspec package?

Note that babel provides a shorthand "--- (if the russian option is indicated) which always types 20% shorter emdash but it also reduces spaces around the emdash and prevents the line break after it.

UPDATE: I have realised that there is no code point in modern Open Type fonts (in contrast to metafont LH fonts used in legacy LaTeX for typesetting cyrillic texts). Both polyglossia and babel with russian option compose a shorter emdash from two endashes, they define a \cyrdash macros as follows

and map it to a shorthand "---. So final form of my question is

How to map the ligature --- to \cyrdash? Is there any solution except for making the dash - active character?

As nplatis pointed out, this is actually in the responsibility of polyglossia, which works for me, but is more or less font-dependent, as polyglossia just uses two “-” U+002D HYPHEN-MINUS and overlaps them, as can be inferred from the PT Sans example, where it does not work: 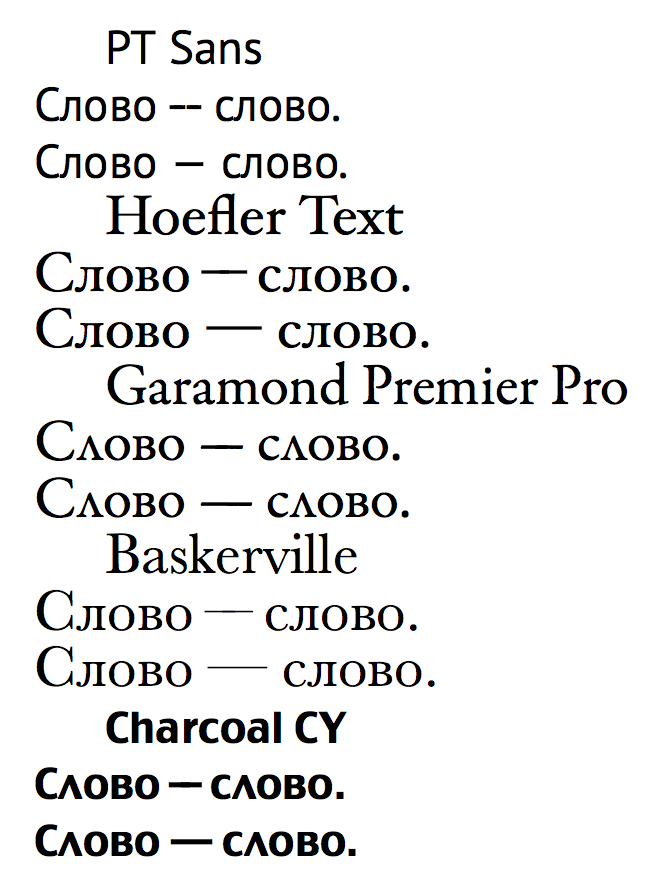 The key to getting this to work is to add the babelshorthands=true to the language selection, so the code to create the above image is as follows:

On a side note, I have not succeeded in getting the shorter em-dash in regular LaTeX, just the narrower spacing, strangely enough: 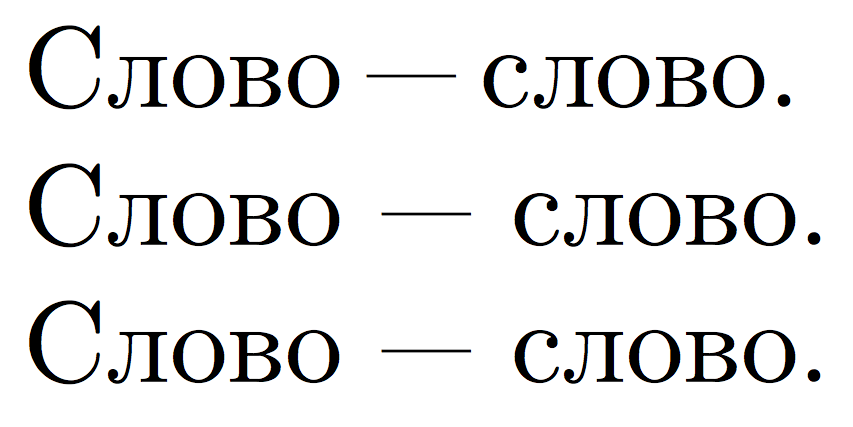 Not the answer you're looking for? Browse other questions tagged fontspec babel ligatures polyglossia or ask your own question.

23
How to enable ligatures for emdash/endash in LuaTeX ?
10
Using active characters to swap fonts?
10
biblatex: change name of author according to language?
11
Translation of words according to babel language
25
Differences regarding kerning and ligaturing when using the MacTex2013 and MacTeX2014 versions of LuaLaTeX with .ttc fonts
5
Changing the language makes the font weight (semibold) go away
3
What about \cyrdash in EU1 and EU2 encodings?
3
How to obtain current language in polyglossia
2
How change emdash ligature?
6
Define new command to switch between normal/condensed variant of font