Combined header cell in a table

This question is closely related to at least two other ones; namely, Tables of numbers, and slashbox alternative.

What I'm after, is the horizontal- and vertical-alignment of row- and column-headers in the picture in the OP from the first mentioned question (re-included below). 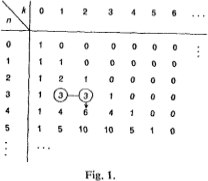 There are some typographical points which haven't been satisfied in either questions answers:

How would one achieve this?

I'm interested in any and all ways to achieve this; be it Plain, LaTeX, Context, Lua, PGF/TikZ, ... whatever!

The way I'm thinking to achieve this, in terms of describing the steps in plain english, is that:

But because my TeX-fu is seriously lacking, I am unable to express these requirements with TeX. Let alone understand wether this is the right approach at all!

Consider the figure below:

The minimum width, you need to have the two words aligned and have a slash between them is the total width of the two words, plus a bit of margins.

Alignment can be achieved by adding a strut of a suitable width to one of the words as shown in the code below (base example is from slashbox alternative).

I am sure that with a bit of perseverance one of our Mathematician members can prove, that it is impossible to construct typographically correct slash boxes! 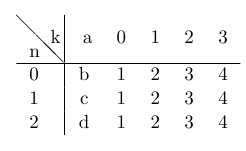 Not the answer you're looking for? Browse other questions tagged tables vertical-alignment horizontal-alignment or ask your own question.

3
tabular can't vertically align the cell to the top
8
Typesetting a table to look like a spreadsheet
11
Vertical Alignment of tikz picture in a table cell
0
single table cell out of vertical alignment
3
Compensating for multispan boxes wider than spanned columns
2
Lyx Table Vertical Alignment
0
Table, Tikz picture in the left, text in the right: how to vertically align?
2
Vertically center textwidth table
4
How to make different alignment in table header of longtable
6
Fixing the alignment of table with equations and images