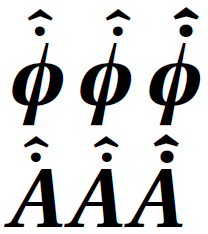 23
How to make a real backslash (escape) character?
11
horizontal alignment of dot over hat over bold greek letter!
1
Is it possible: change style of umlaut (diacritic dots) into longer vertical "pretty" umlauts?

6
How to identify and install a specific math & text font?
1
How to get font family name identify usable characteristics
9
textcomp \textarrow not found in font family ppl TS1 encoding
5
Is there a package to set the default font encoding of cyrillic to T2A?
1
Math operator names in sans serif with accents using eulerpx