What do I need in order to use TeX on Windows as an eventual replacement for Word?

What do I need in order to use TeX on Windows as an eventual replacement for Word?

What software is available for Windows for WYSIWYG editing of TeX files?

MiKTeX is a good bundle on Windows. It includes the LaTeX environment as well as an editor. Should be enough to get you started.

For WYSIWYG there is Lyx (though they call it "What You See Is What You Mean"/WYSIWYM, not WYSIWYG).

One thing you need to move from MS Word to TeX and friends is to drop the desire for WYSIWYG. For complicated documents that paradigm is, at best, WYSIPCTYADFWYG: What You See is Probably Close To, Yet Actually Different From, What You Get. (Not the basis of a marketing campaign!)

TeX and friends offer a fundamentally different way to think about document composition.

Lyx, which other answers have directed you to, is WYSIWYG'ish, but the "ish" bears emphasis.

I personally think that while the Lyx folk are awesome, you are best to think of Lyx like training wheels. If you can learn to ride without them, you are better off.

If you're looking for a direct replacement for Word, you're never going to find it in TeX. They are fundamentally different products, even if there is some overlap in what they're used for.

Word is built from the ground up to be a WYSIWYG word processor, and nothing else. It couldn't care less about actually producing nice-looking text, as long as it's able to present an editor that looks exactly like the output.

TeX is designed from the ground up to actually output professional, nice-looking documents. It does this by sacrificing the WYSIWYG paradigm. In order for TeX to typeset your document, it has to be given freedom to do so. Which means that it doesn't let the user see the document while you're editing it (because the output is constantly changing in non-obvious ways. Line breaks change, ligatures are inserted, the table of contents is updated and so on.)

In a sense, Word allows you to take a document, and insert a character into it. And what you get out of it is precisely that: the same document, but with that extra character of text. All other changes are minimized because it'd confuse the user of the WYSIWYG editor.

TeX on the other hand, doesn't allow you to insert into an existing document. You can generate a new document which contains that extra character of text, but it's a different document from the original one. The entire paragraph you inserted into might have changed, the characters surrounding the one you inserted may have changed, and so on. Tables and images might have been moved to an entirely different page.

As much as I like prefer TeX over Word, I would never recommend it as a direct replacement. Someone expecting to work with MS Word might find OpenOffice acceptable, but they'll just be frustrated by TeX.

Anyway, Lyx might be a reasonable compromise, giving you something like Word's WYSIWYG editor, while still producing TeX-style documents.

For "true" TeX, MikTeX is the de facto standard on Windows. It comes with pretty much everything you need.

I'd suggest trying out http://docs.latexlab.org. You sign in with an existing Google account, and it has syntax highlighting, docs can be saved 'on the cloud', and everything can be compiled there and saved in pdf format.

Once you have miktex installed, there are two different latex IDEs you can use. TexNICcenter is a nice freeware package and WinEdt is shareware but is also quite decent.

TeXworks is a great cross-platform, free and open-source editing environment. On Windows it works great, and has a built-in previewer which my previous editing setup with WinEdt did not have.

On Windows I prefer using TeXlipse plug-in for Eclipse. Not WYSIWYG but looks quite convenient for me. 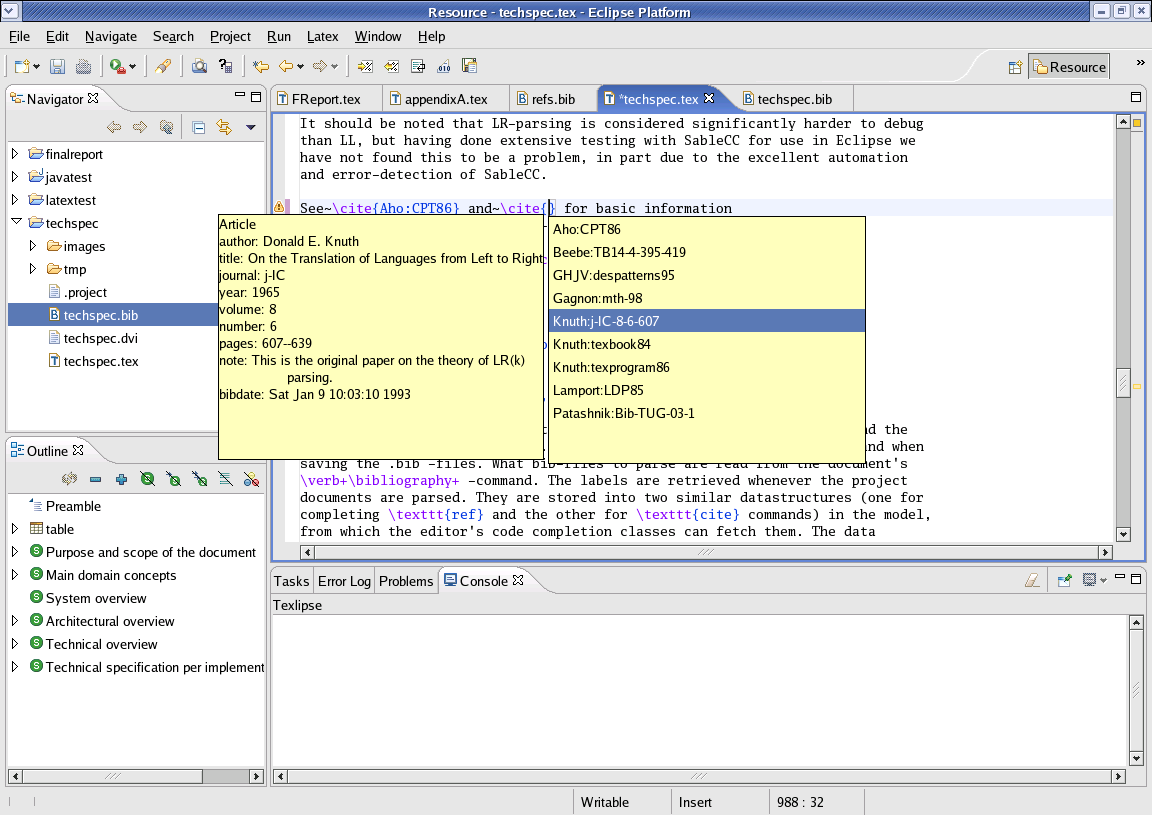 (screen-shot taken from the TeXlipse site)

For new LaTeX users on Windows, I recommend the proTeXt bundle. It contains the MiKTeX distribution, TeXnicCenter as an editor (both of which have been mentioned here before), and a few other things like Ghostscript, which is software for processing PostScript (*.ps) files. (TeXworks, another editor, is included, too, since it comes along with MiKTeX.)

The biggest plus for an unexperienced user, however, is the included pdf manual (here's an outdated version of it) that leads you through the entire installation step by step. So all you need to do is download one (admittedly large) file and there you go.

Even though it seems alluring in the beginning, I don't recommend using WYSIWYG software for LaTeX. In my understanding, one of the core ideas of LaTeX is about being able to focus on the content rather than the form. You tell LaTeX "This is a chapter heading" and LaTeX takes care of what it'll look like. You tell LaTeX "I'll end this paragraph here" and LaTeX takes care of all the line breaks, hyphenation points and whatnot. While you're writing, you don't have to worry about what your document will look like; it's all about the structure. Once you want to customize your documents a bit further, LyX will likely get you into trouble, that's at least my impression from briefly trying it out and reading questions about it here on tex.sx.

I'd actually suggest using pandoc. Pandoc converts input from one format to another, and considering markdown is about as human friendly format as one can get (it is, in fact, in use on this very site), you get beautifully typeset documents from a very, very easy to read and write format with the assistance of pandoc and TeX. And if need be, you can get other ouput formats from your very same input (say, a HTML-file for example).

You can install the Texlive distribution and an editor such as TeXniccenter or even Emacs+Auctex.

Since you're looking for something WYSIWYG-like, I know two approaches:

I would go with TeXmaker. I am quite happy and comfortable. Give that I used TeXnic Center, I'd personally recommend, TeXmaker.

Here is a link to TeXmaker.

Enjoy the experience with $\LaTeX$.

I would not go for a wysiwyg solution. It seems to be easier on the beginning but as soon as you get familiar with the syntax then you realize how much faster you can go with an IDE.

On windows I usually go with the TeXnicCenter/MikTeX combo.

If you want a fully WYSIWYG solution and you are willing to invest money, Scientific Word is also a choice.

Not the answer you're looking for? Browse other questions tagged editors windows distributions wysiwyg or ask your own question.

7
TeX daemon for Windows
7
Recommendation: tex editor, word and windows user.
3
What is the “simplest” to install restructured-text to TeX software (for windows)
15
What is a good LaTeX compiler for Windows?
9
Getting a live preview of TeX (on Windows) - for just a small snippet of code?
1
What editor should I use for working both on Windows and MacOS?