While finishing an article for TUGboat I came across a strange behavior of the protrusion mechanism of pdfTeX (as implemented by the microtype package). The character \ in typewriter has a negative left margin protrusion, i.e., it normally sticks out by 1.57498pt into the left margin. However, if the same text is used within a quote environment of LaTeX, the protrusion on the first line vanishes as can be seen in the following example:

As a result we get 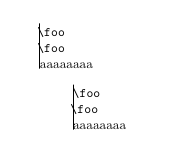 Now the problem is clearly related to how pdfTeX implements protrusion and in Unexpected interaction between microtype and \parindent this is already discussed in relation to the intentation box.

In this case here there is no indentation box. Instead we do have a hidden "label" box added by the quote environment as that is really a trival form of list. Thus there is a hidden \item without any visible output (like a zero width indentation box).

So here are my question(s):

Not the answer you're looking for? Browse other questions tagged pdftex quoting microtype protrusion or ask your own question.