I am busy typesetting a book for guntenberg.org and I would like to keep as far as possible close to the original style. The book was written in 1787. Here is an extract. 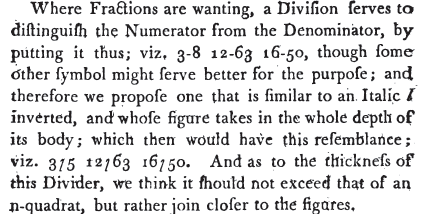 Is there a similar font for LaTeX? I would particularly like to retain the ligatures and the long s i.e., "ſ" used as 's'.

One thing you could try would be the "Day Roman S" font, which seems to be preconfigured to insert the long (f-like) s in the proper spots. Link: http://www.tug.dk/FontCatalogue/dayroms/

Another avenue is to use XeLaTeX and the fontspec package, which provides an easy way to turn on uncommon/historical ligatures. You then need a font that supports these ligatures -- the free Linux Libertine (to give just one example) does, but perhaps without support for the long s. Fontspec only works with OpenType fonts, and I don't think Day Roman S is available in that format, so these two possible answers are mutually incompatible. But try them both and see which works for you.

It may be worth pointing out that the rules for when to use long "ſ" and when to use round "s" are not as straightforward as they might appear at first (and these rules vary depending on language and time-period). This is a useful reference: http://babelstone.blogspot.com/2006/06/rules-for-long-s.html

So I'm a bit curious about what algorithm the Day Roman font package uses to automatically choose between "ſ" and "s".

Following up on Willie Wong's answer above, here's an example using Kepler Project fonts (which works in regular LaTeX):

That is not hard to do since most quality OpenType fonts have the ſ character and appropriate ligatures. Here is an example for Minion Pro, which comes for free with Adobe Reader:

Try also the Kepler Project fonts with the fullveryoldstyle option. It contains the ct ligature and the old-style s (two items that stick out to me in the capture you posted in your question).

Hoefler Text supports most – if not all – of these ligatures, and it ships with OS X. (In fact, it’s used throughout the fontspec documentation to showcase exactly those features.)

You also need to enable “Rare”, “Historic” as well as “Contextual” ligatures regardless of the font.

Not the answer you're looking for? Browse other questions tagged fonts ligatures or ask your own question.

32
Suppress certain ligatures generally
9
Deciding Which Glyphs to Use in Font Encoding
3
New Wiley LaTeX style
7
How to force use of a normal 's' and how to suppress ligatures when using Gothic font?
3
Set Math Font like in Beamer
11
How to use Boondox calligraphic font in LaTeX without replacing \mathcal command
9
Historic font and missing ligatures
2
Change main text font only
0
Is there a "secret-service" font package?