Is it possible to interact with TeX mid-process?

I ran this code once, and aborted the process after it reported producing something like 47,000 pages (in a very short amount of time). Unfortunately, my computer complained that the resulting pdf file was "damaged" and could not be opened. A better (perhaps impossible?) answer would produce a file such that the output could actually be viewed once the process was killed (or died).

This got me curious (and it is merely a curiosity). Can TeX die gracefully? Since its output is a PDF, presumably it needs to do some non-trivial stuff at the end to ensure that the PDF is valid so merely killing TeX is too abrupt.

A more graceful method would be for TeX to ask at each shipout "Shall I continue?", but that suffers from the other extreme: it is too intrusive as the user needs to keep giving commands to keep TeX going.

Off the top of my head, the only way I can think of to communicate with a running process in a non-blocking way is via a file. At each shipout (or other), TeX can check for the existence of a file and continue if it doesn't exist, and if it does then read the file and carry out whatever actions said file contains (thus allowing for more refined communication).

Is there a better way? 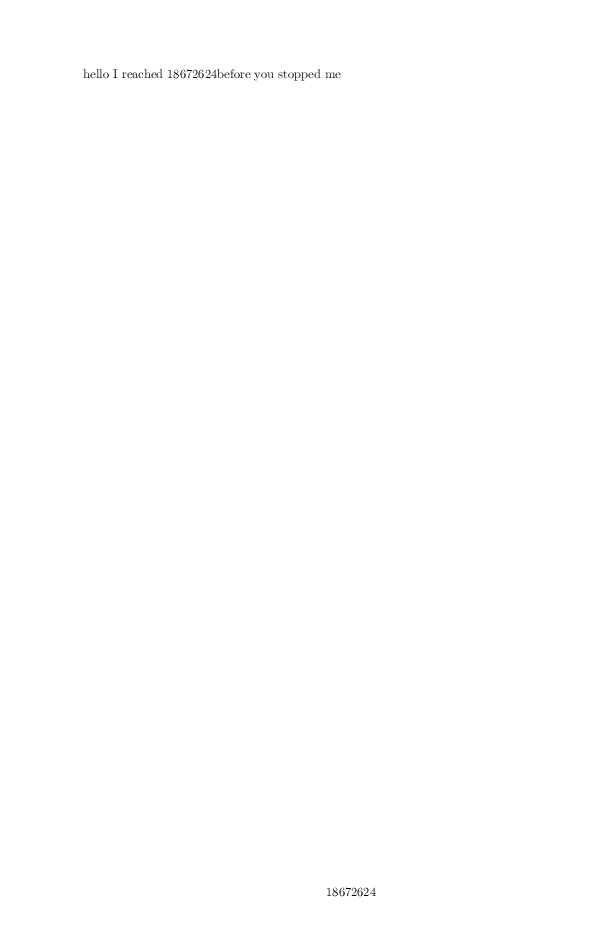 For a bit then stop it at the terminal (control-c in most shells) and enter i\resume and it will finish cleanly:

If you set \pausing=1, TeX will stop after each line of input read from the file.

Maybe setting a timer in \everypar? I used \pdfelapsedtime as shown in my post at Benchmarking various operations of TeX. In the MWE that illustrates the technique, I have used a simple

to do the time check. Code is rough and just a concept.

Change the "Finish" to \enddocument to terminate.

3
Possible to call “command codes” from LaTeX?
12
TeX command with argument BEFORE the command
3
How do LaTeX macros interact with the TeX engine?
14
Why does the TeX scanner process tokens for register numbers and macro names differently?
1
Is it possible to prevent a page break within a block of TeX in plain tex?
4
Interacting with plain-TeX programs
0
Is it possible to output a WEB constant with a TeX (or WEB) command?
5
Why does `\endinput` bring TeX into interactive mode while there are still tokens to process?