I am trying to use pgfkeys to store some text for use later. The end goal is to use a key filter to process options first and then apply them to text before it is stored.

In the MWE below, if it try to store text containing \par, I get an error when using pgfkeysfiltered but not when using pgfkeys, which you can see by uncommenting the commented line. I know I am not really using a key filter in the example below, but this is fairly minimal.

Is there any way I can resolve this? Or is this intended?

Some macro used by \pgfkeysfiltered is non \long, so it doesn't accept arguments containing a \par token.

In these cases, assuming a \par makes sense (it's up to you to ensure it), you can use the "almost" synonym \endgraf. Be careful, however, that in some places LaTeX redefines \par but not \endgraf.

and using \notpar in the problematic place.

You can try patching the involved commands; I get no error after these incantations (to be issued after \usepackage{pgfkeys}):

This makes those macro to accept arguments containing \par.

As suggested in this answer, also the following way, which is more generic, can work:

How do you find the macros to patch? Well, the error in the original code is

(after adding the generic code above). Now you get a similar error

so you know you have to add

These must go between \makeatother and \makeatletter, because the macro have @ in their name.

TeX has an old feature that macros can be either defined short/*normal* or long. Only long macros may include paragraph breaks, either explicit ones (\par) or implicit ones (two sequential line breaks). This was implemented to cause an error quickly if a macro argument was not closed properly, because at this time (1970ties etc.) computing time was expensive. Nowadays it has lost its importance and LaTeX's \newcommand defines macros as long by default (the starred version doesn't).

Apparently some internal macro in \pgfkeyfiltered was not defined as long, so a TeX error is thrown if the content contains \par. This is most likely a bug and should be reported to the author of the code. You can workaround this issue by hiding the \par from TeX e.g. by using \csname par\endcsname or a macro which contains \par like \newcommand\mypar{\par}. 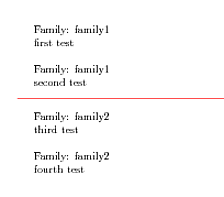 Other filter handlers include

Not the answer you're looking for? Browse other questions tagged macros paragraphs pgfkeys or ask your own question.

15
Is there a simple way to retroactively add the \long prefix to a macro's definition?