Writing the Existential Quantifier with Lower and Upper Limits

When I write $$\sum_{i=1}^{n} x_{i}$$ I obtain indices which are below and above the symbol. I want to write the existential quantifier with this same formatting, but when I try to do so, it appears as $$\exists_{i=1}^{n} x_{i}$$ with the indices written to the right of the symbol on the bottom and top, respectively. Is there any way to change this so that I have a big $\exists$ symbol where the $\Sigma$ is?

Here is a solution which is similar in spirit to Mico's earlier answer, condensed into a few lines of code. This requires amsmath.sty and scalefnt.sty. (Thanks to egreg for remarking on multiple improvements to the original answer; I've condensed it further based on his remarks.)

The choices of font size were achieved by experimentation, and should be adequate for normalsized Computer Modern at 10pt to 12pt. Minor tweaking may be necessary for other typefaces. Because other font sizes (such as \Large and \footnotesize) are achieved by scaling up the size of normal characters, this should also work in other font sizes up to the limits of \scalefont to change the character size (up to about \LARGE at 11pt).

The parameters were chosen to achieve as similar an appearance as possible to the size and alignment of \sum in each context (displaystyle, textstyle, scriptstyle, and scriptscritstyle), with the same default behaviour of \limits and \nolimits in each context. In particular, the \vphantom\sum at the beginning of \bigexists is used to achieve precisely the same vertical spacing of the limits from the \exists symbol, as the limits would otherwise be closer to the symbol than they should be. Here is how it looks at 10pt: 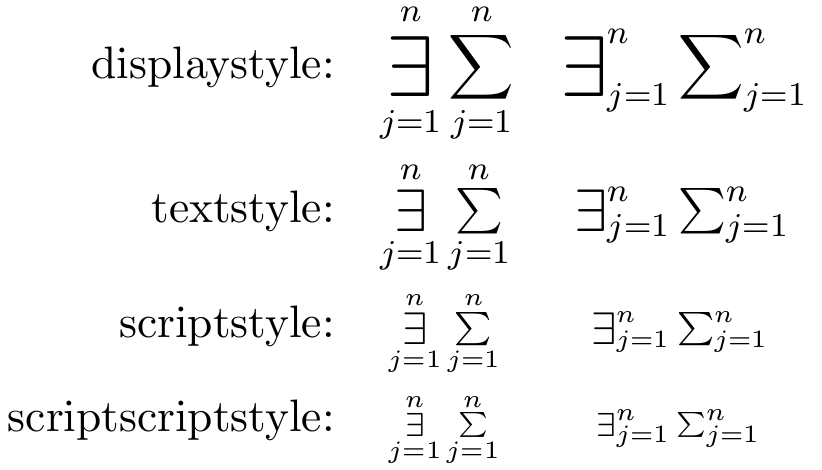 This same code should be similarly generalized to any symbol of a similar height and depth (e.g. \forall).

It should be easy to tweak the results to obtain better tuning for other fonts or point sizes; additional refinements (or defining a custom character with \METAFONT) may be necessary to obtain a more robust solution.

Whereas the symbols for \sum, \prod, and \int (and a few more select symbols) are designed to scale automatically depending on whether they're used in "textstyle" or "displaystyle" math mode, that's not the case for symbols such as \exists.

I can think of two workarounds. The first is to load the relsize package and use its \mathlarger command to enlarge the size of the \exists symbol. I don't know just how large you intend the \exists symbol to be; in the following example, I use a four-step enlargement of the symbol's size. Note also the use of the \lower directive (a TeX "primitive" command) to shift the position of the newly created symbol down by 0.75ex. 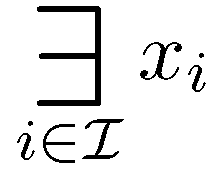 A second workaround involves loading the graphicx package and using its \scalebox command. In the following MWE, a scaling factor of 1.7 is chosen to make the resulting large symbol roughly comparable to what's produced by the four-fold use of the \mathlarger command.

Addendum - By default, the "limits" of the \bigexists and \bigex symbols will be set below and above the symbol. If you wanted to side-set the limits, you could type

whenever necesssary. The \nolimits directive will override the \limits instruction contained in the definition of \bigexists and \bigex.

The result probably isn't entirely satisfactory from a typographic point of view, because the stroke widths of the newly created \bigexists and \bigex symbols appear to be quite thick and heavy (to me at least...). A full solution would entail creating a new symbol entirely from scratch.

Not the answer you're looking for? Browse other questions tagged positioning math-operators or ask your own question.

9
XOR and II (concatenation) summation symbols
29
Lower and upper Riemann integrals?
8
Offset a symbol without changing layout
2
How to adjust the alignment of a mathematical expression in a text section? e.g. argmax
3
Positioning of \hrule and \vrule
2
Making the product operator (pi caps) with the extremes above and below the symbol
3
Knowing where floats are positioned to add conditional attributes
3
How to create your own integral sign with limits