A MiKTeX update removed amsmath as obsolete – can I use another package or get it back?

I have a problem with amsmath package. After an update this package was removed because it was obsolete. But what package can use instead of amsmath?

MiKTeX has reorganized the package amslatex. Therefore the update removes it: 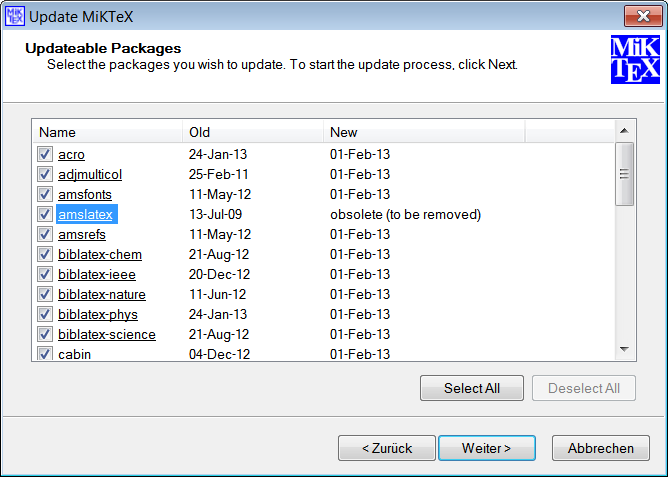 However, the update has not installed the new packages automatically. Therefore I have installed them manually. For AmSLaTeX you need at least amsmath. It contains the package file amsmath.sty. amscls contains the AMS classes (amsbook.cls, …).

amsmath is definitely not obsolete! It may have some old and unrepaired bugs, but it still has the status "maintained" and AMS has every intention of keeping it that way.

Something else must have gone wrong with your update.

EDIT: amsmath and the AMS document classes + amsthm used to be combined on CTAN under the name amslatex. They have always been separate in TeX Live, and, although originally bundled together on the AMS server, were repackaged in mid-2010 to be distributed in two parts.

This split was implemented in late January on CTAN, concurrent with a minor update (version 2.14) "to provide more fluid interoperability with stix.sty. It should be fully compatible with version 2.13."

The consequences of this change (and the ensuing confusion) eluded me when i first answered this question, a fact for which i apologize.

You can use mathtools instead (you should it instead of amsmath because it fixes a bug).

I had a similar problem today. I ran the update a second time, and that eliminated the error message.

You can fix it by using "Package Manager (Admin)" from MiKTeX 2.9.

Not the answer you're looking for? Browse other questions tagged packages amsmath miktex updating obsolete or ask your own question.

5
amsthm and amssymb disappeared after updating?
0
Problem with Miktex installation
0
Could not compile pdf after updated
317
How do I update my TeX distribution?
54
How should one maintain and update a MiKTeX installation?
5
Installing amsthm.sty under MiKTeX
9
How to check tikz version using \listfiles Command
7
amsmath.sty not found
0
etex.sty not found!
2
Still showing the file is missing after installing the package of MikTeX
see more linked questions…