When I try to typeset this in a minimal document

I get the following error message:

So there appears to be a problem trating greek letters as variable tokens. Can anyone suggest a way to resolve this, i.e. to actually typeset a ξ or similar greek letter as a variable in a polynom long division?

The manual seems wrong about this: you must use simple letters for your polynomials; but you can use a devious hack:

Just choose an unused letter for your Greek one, et voilà. 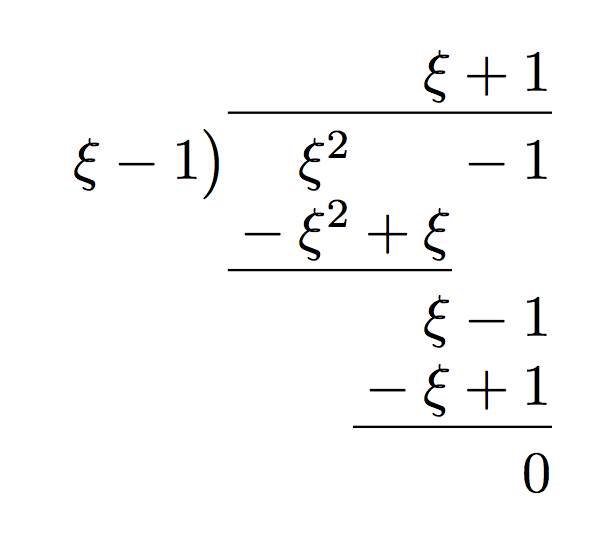 A bit of explanation is in order. When TeX is in math mode, it looks at letters (more precisely, character tokens of category 11 or 12) as math characters, which have a mathcode attached to them. Control sequences can denote a mathcode and this is the case for the Greek letters: the definition one finds in fontmath.ltx

ultimately boils down to the primitive statement

where the first digit 0 tells TeX \xi is an ordinary symbol; the second digit is the "math group" (1 corresponds to letters); the third and fourth digits tell the slot in the font where the symbol should be taken from.

we assign A a mathcode with the same specifications; actually we don't need to know what mathcode is associated to \xi, because any control sequence defined with \mathchardef can be used as a number when the syntax of TeX requires one. So with

we're saying that any A in a math formula, from that point on, will just behave like \xi. Of course this respect grouping, so all of this takes place in a group; I delimited it with \begingroup and \endgroup, { and } would be good too, but the former delimiters pose less problems than the latter in certain situations.

Not the answer you're looking for? Browse other questions tagged math-mode errors greek polynom or ask your own question.