A ligature for she/he

A Compulsory Edit : I'm using this "s/he" thing quite a few times in the thesis. I've noticed that ⚧ (transgender unicode symbol) is even in the Unicode list, so I thought this might be a nice addition.

I'm not really losing sleep over it but it would have been nice if such a generic ligature was available maybe even for legal text. Probably in the end, I'll get tired and remove every single copy of it with a he and have a beer afterwards and write mean comments about vegetarian diet on Youtube.

Hence what I could have used in place for s/he is not important, take it as a pure typography challenge regardless of its use.

I find myself often grinding my teeth I need to keep this gender neutral thing in mind... even though I have no belief for its purpose. I can understand and respect the movement of increasing consciousness but over time, this showed only inconvenience rather than its original intended purpose. Maybe a genuine neutral pronoun is better but I don't know anything about linguistics so nevermind, I digress. ( for alternating use of he,she,his and her etc. automatically, look at Alan Munn's he-she package).

I'm thinking of a standalone ligature for handling this once and for all in my document. Initially I've tried to make the slash a little more pleasing but due to the geometry of s and h, forward slash is blocked by the extender of h and backwards is sticking out.

Question : Can you please propose alternatives that would serve as a general ligature that can be applied to as many mainstream fonts as possible? I can cook up my own version for a specific font if the idea is generally applicable to any font. It would be really great if it works with PDFLaTeX but it's not a deal-breaker.

Examples : Font-specific tricks such as hiding s in the serif of h, .... (a failed attempt) 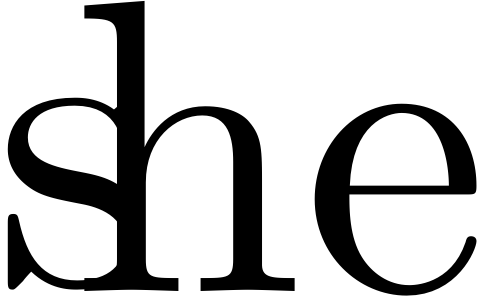 Letter-cropping-based ones : Well, I can't believe how ugly it turned out to be but for the sake of argument, here it is (butchered via TikZ): 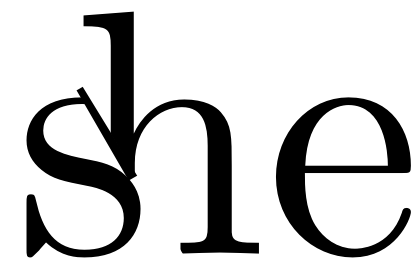 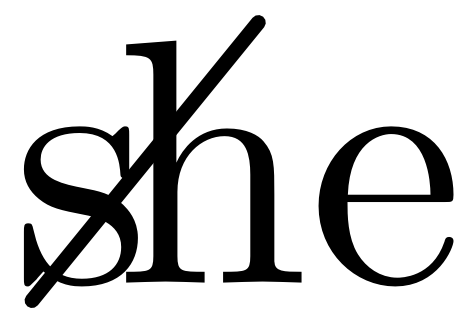 st and ct type ligatures, from wikipedia (I'd better not touch that)

and many more. Excuse my current lack of imagination but, it wouldn't do much good anyway if compared to our font experts here.

In typophile.com forum, user dudefellow kindly posted the following nice idea which is kind of what I'm trying to get from my question. Hence, I'm posting it as a demonstration of what I'm after. 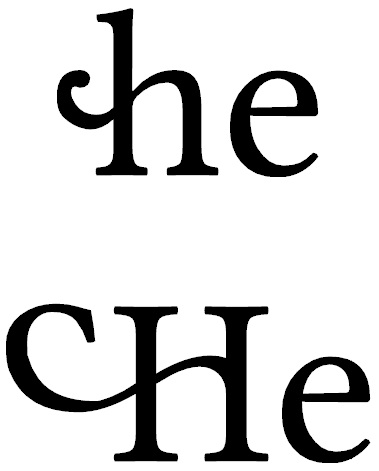 I would appreciate if we can limit the discussion to such propositions. It's more of a design question rather than the linguistic part as I've tried to clarify in the edit of my question.

More ideas about the ligature (thanks to dudefellow for the Armenian twist): 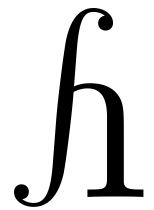 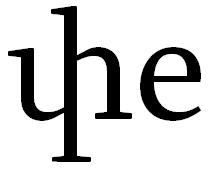 Why use ligatures? Ligatures are kind of anachronistic in this context. ;-) Use something modern: color!

I like the versions using accents because they are robust with respect to font change. Also 6) and 7), which are actually real existing ligatures.

Some pure unicode options, for the fun of it, also much convenient to type:

EDIT: The results depends on the Font used. I didn't find a font that get all this right.

If you need a ligature, this would be my best answer:

The only problem is the upper ligature of the s.

If it should look really good, you need a real ligature and consequently change the font for that. Try fontforge for that.

I guess it’s impossible to create a ligature by only shifting and scaling the letters. A ligature is an own symbol/glyph which has to be designed individually as every other character too. There are two main reasons for that individual design process:

This image (taken from Tosho’s code) shows that 1. and 2. are not satisfied. 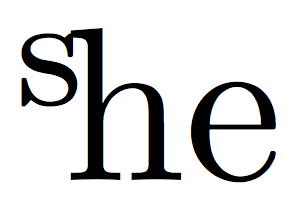 The only option would be to create the ligature with a font or vector editor, in the latter case the figure could be imported as an image or if the licence allows one can even add the new glyph to an existing font.

Of course, it is just an approximation to illustrate an idea. This shape is almost symmetric, and as a bonus it even has a heart in the middle.

I have a colleague who I thought might now, so I asked (s)him. The answer was a simple "(s)he" (no ligature provided).

Not the answer you're looking for? Browse other questions tagged ligatures kerning or ask your own question.

6
Fix ligature mapping of obscure old font with LuaLaTeX or XeLaTeX
16
Easily assign undefined ligatures with pdfLaTeX?
34
In lualatex, hyphenation doesn't seem to work for words that contain certain ligatures
10
Using active characters to swap fonts?
48
How to suppress a “Rare” ligature that pre-empts a “Common” ligature for the same character pair?
8
\pdfglyphtounicode with XeTeX
4
setting kerning for a glyph and a ligature
3
Boundary ligatures in math mode