Do starred commands eat up space after them?

Do starred commands eat up spaces after them, like unstarred ones do? That is, is \somecommand* nextword equivalent to \somecommand*nextword?

And: Does it depend on the particular way a starred command is defined?

Edit: Note that the original version of my question left out me considering only zero-argument commands. I was assuming this, and it was mostly clear (albeit implicit) from the question statement. User @tohecz has written a valuable answer (to the pre-edit version) addressing this detail.

Note that I'm asking about commands with a star at the end of their name (\somecommand*), not about whether the command was defined using a starred defining command (e.g. with \newcommand*).

As the other answers show, they do not. However, the spaces get "eaten" if the macro takes other arguments after *: 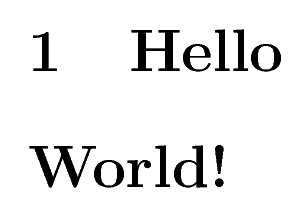 In general, TeX ignores all spaces when looking for an argument (unless it is not, which is when an argument is delimited (like optional arguments are):

As other answers have indicated, technically the space dropping is part of the scanning for a command name, and at the primitive TeX level the * is not part of the name.

However in LaTeX syntax the star form is always considered a distinct command \section and \section* are documented as two related commands, not one command that looks ahead to see if there is a * or not.

So it is good practice to make the star form have similar behaviour to the non-star form.

In all cases in the base LaTeX format, as far as I can see, the *-command is always used with arguments (like \section*) and so any space is skipped at a different stage or occurs at places where a space character will make a space token but won't produce space in the output \\*, \ProcessOptions*.

Thus I don't think any standard LaTeX * form of a command would produce white space from a space character after the *.

Only control words eat space after them! Control words are macros begin with the escape character \ and followed by one or more letters.

Not the answer you're looking for? Browse other questions tagged spacing macros starred-version or ask your own question.

103
Defining starred versions of commands (* macro)
28
If I redefine a command that has a starred variant, will that always disable the starred variant?
4
How are space tokens and empty lines processed by long commands (as their potential arguments)?

103
Defining starred versions of commands (* macro)
5
pgfmath expansion - call a command from within a pgfmath environment
7
Use \csname … \endcsname to compute the starred-version of some command
27
Do all starred commands have anything in common?
476
Space after LaTeX commands
28
If I redefine a command that has a starred variant, will that always disable the starred variant?
8
Eat double space
20
Is it possible to define a command taking an optional star and working in a subscript?
1
Manually resize a grouping macro
1
Definition of starred commands with `csname`