What are the different kinds of vertical spacing and horizontal spacing commands available?

I'm not thinking so much about

I'm thinking more along the lines of such things as

And I'm sure I've forgotten a few.

What would be nice in addition is to not only have some kind of an explanation of the uses and differences of these commands but also a pointer to where someone can find documentation for them. For example,

Sometime I don't always get the result I expect 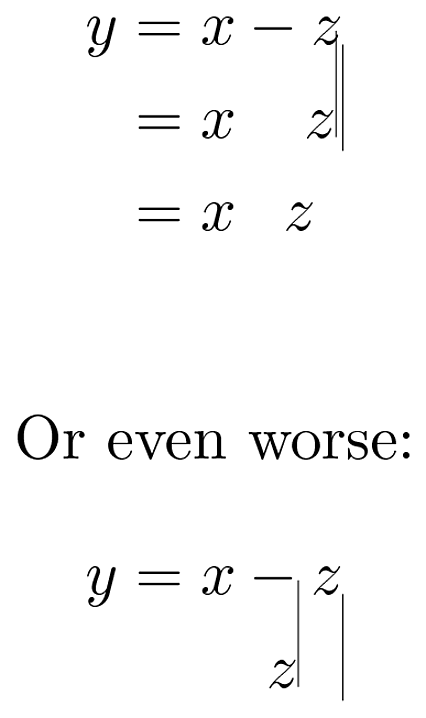 Calling these spacing commands is a bit misleading they are all commands to set boxes of specified dimensions.

\rlap, \llap \clap are essentially \makebox[0pt][r], \makebox[0pt][l] and \makebox[0pt][c] except they can avoid the complication of looking for optional arguments etc. Also they differ in the way that \hbox differs from \mbox in that following the plain TeX rather than LaTeX tradition they lack a \leavevmode at the start of their definition so they do not start a paragraph if used in vertical mode.

In text mode, the phantom commands are all equivalent to using an empty box with dimensions given by another box, so \phantom is essentially

\vphantom is the same except that the width is forced to 0pt rather than the original width of the text in the first box.

The math mode versions are all essentially the same except for two complications, math mode has to be re-entered inside the box, and a \mathchoice construct has to be used so they work correctly at display and script sizes. \phantom and \smash have built in math mode tests and then switch between the text and math definitions automatically. For \rlap (just for historical reasons) it is text mode only, so for math mode you need to switch batc to math explictly or use \mathrlap from a suitable package.

Note that in \mathmode always makes a mathord atom which gets no special spacing. In the examples in the question you compared the spacing of - with the mathord spacing and the mahtop spacing but - is a mathbin atom so you need \mathbin{\phantom{-}} 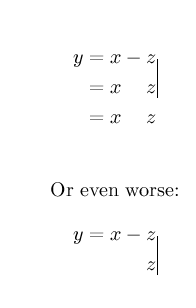 Even then spacing of subscripts may be different

in which the subscript is not the same as

It's pretty hard to avoid that as the boxing implied by phantom obscures the kerning information in the font metrics, but fortunately it is rare to want a visible subscript on an invisible base.

828
What commands are there for horizontal spacing?
303
What are the different kinds of boxes in (La)TeX?
6
Adjust placement of commas and periods in TikZ txt style
2
Overbrace/underbrace without extending brackets/parentheses