How to draw penrose diagrams with TikZ 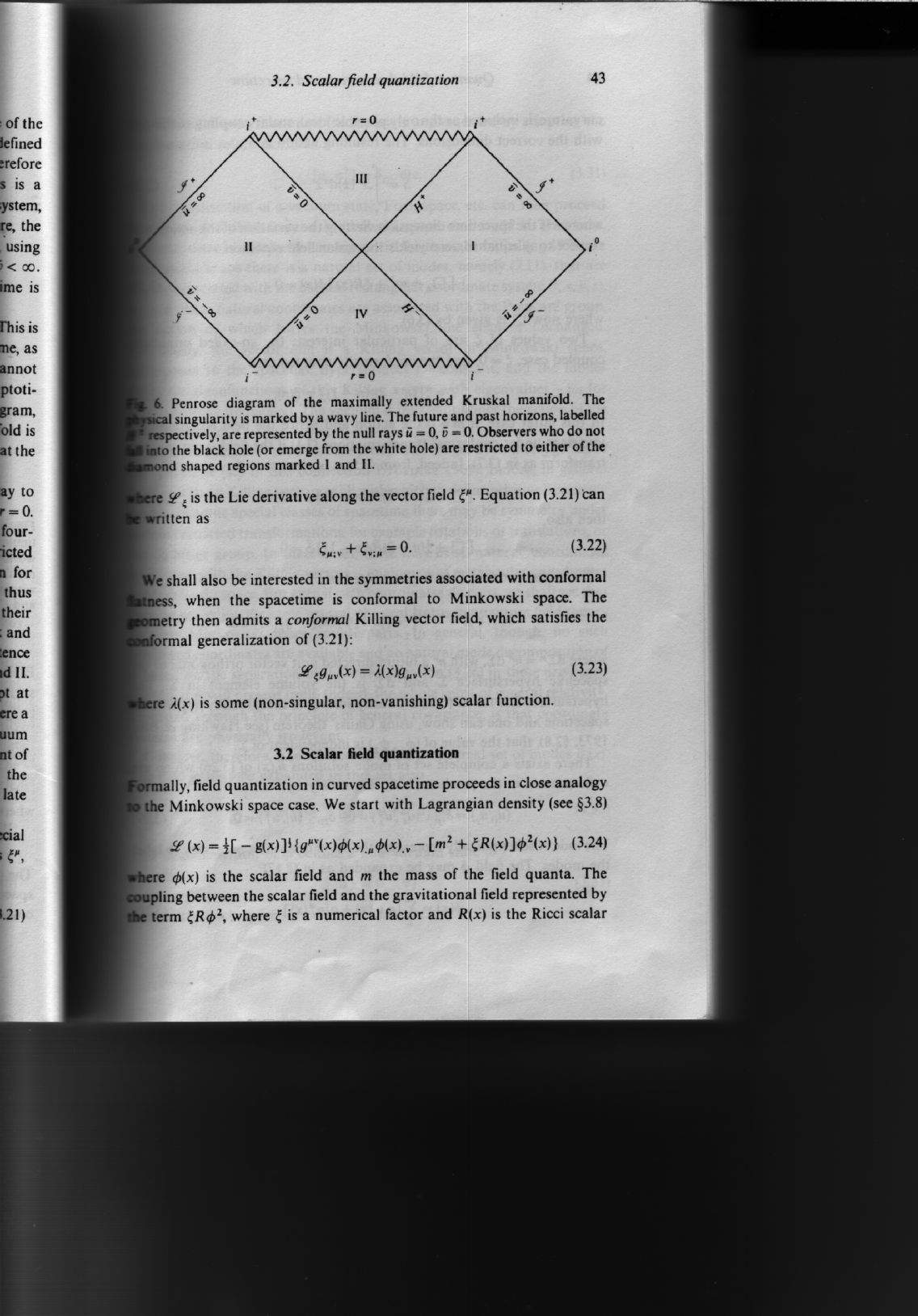 I know tikz can be used to generate plots and I have familiarized myself with the basics of generating an axis and adding coordinates, but I have no idea how I could get a figure like this for example, even though it is just a bunch of lines essentially. Could anyone advise? Or is there another program I should be using for such diagrams..

The following code should get you started. Since I asume you are a tikz beginner, I'll provide some basic explanations after the code: 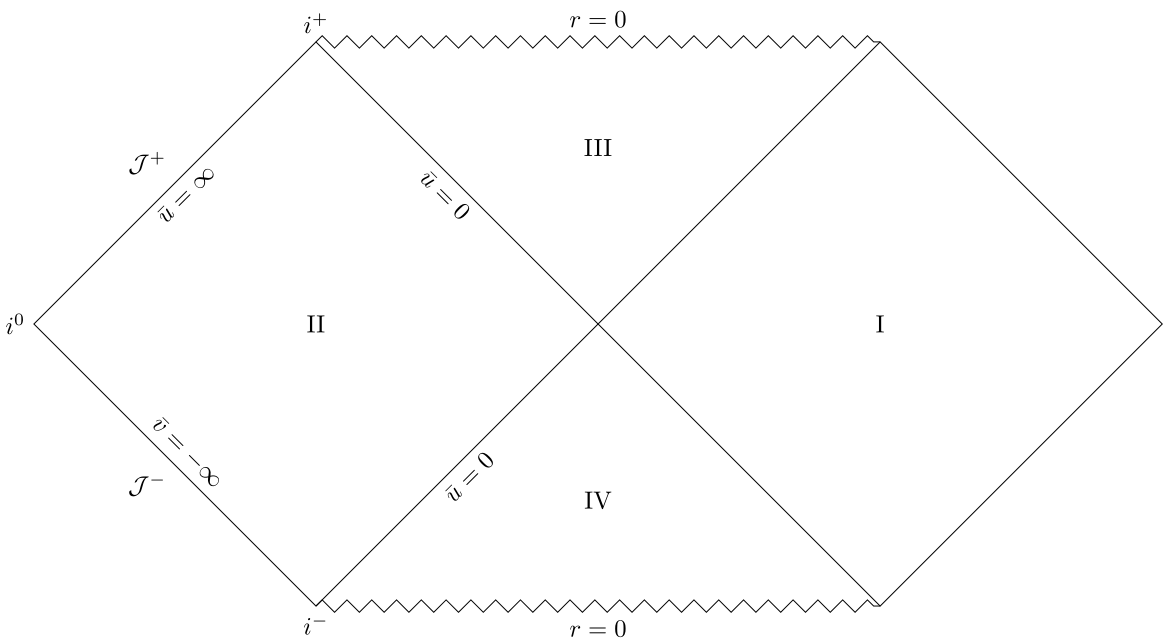 Tikz has a syntax very powerful and versatile. You can specify the coordinates of your drawing in different ways.

With the above, you can read now the first few lines. Each of the initial \node commands define a named coordinate, with names (I), (II) and so on, at the given absolute cartesian coordinates (4,0), (-4,0) and so on). Also they place some text at those coordinates (the text between braces {I}, {II}, etc.)

The next \path command does a lot of things. It starts by setting the coordinate (II) as the origin for the remaining relative coordinates. Then, using polar coordinates relative to (II), some other named coordinates are defined, at right angles around (II) and distance 4 units. I named those coordinates (IItop), (IIbot) etc, using another syntax which uses the keyword coordinate as part of a path. At same time I typeset some labels a those coordinates, using the label option.

For the right diamond I removed all labels, and left only the drawing commands. Placing the labels should be almost identical to the first diamond and it's left as exercise.

Finally, the squiggly lines are added, connecting the appropiate coordinates at top and bottom of the diamond. I use again a node[midway] to place some text above (or below) those lines.

Hope this helps to get you started, or at least to motivate you to read the manual and give Tikz a try.

to draw a curved path from what you have called Ibot to the centre of the squigly line at the top of III labelled r=0. This could pass roughly 0.75 the way through the line that joins IIright and Itop.

This gives me the opportuniy of introducing other useful Tikz capability, which are calculated coordinates. In order to use this feature you need to add calc to the list of \usetikzlibrary arguments. In this case:

Thanks to this library you can use at any place at which a coordinate is required, a mathematical expression (enclosed by $) involving addition or other operations with coordinates. It also defines a special operation called "interpolation", which has the following syntax: ($(A)!x!(B)$), where A and B are coordinates (cartesian, polar, named ones...) and x is a number between 0 and 1. The resulting coordinate is a point located in the line A-B, at a point proportional to x (0 means A, 1 means B). In fact, x can be negative or greater than 1, allowing extrapolation.

Using this feature, the pont "at the middle of the top squiggley line" would be: ($(IItop)!.5!(Itop)$), so the next command would draw a straight line connecting the two required points:

But the OP requested a curved line, not a straight one. To get a curved line, the easiest way (tikz also has several ways) is to replace -- by the to operator. This operator without options draws a straight line, the samen than --, but you can give options to it to bend the line.

For example, you can specify the angle at which the line leaves from Ibot, and the angle at which it should enter at the final point. This produces a curve. However, those parameters alone does not define a single curve, but a family of curves. You can fine-tune the curve obtained with the parameter looseness, which is 1 by default. Increasing this parameter makes the curve "more curve", and reducing it makes the curve more close to the original straight line.

By trial and error I've found these values: 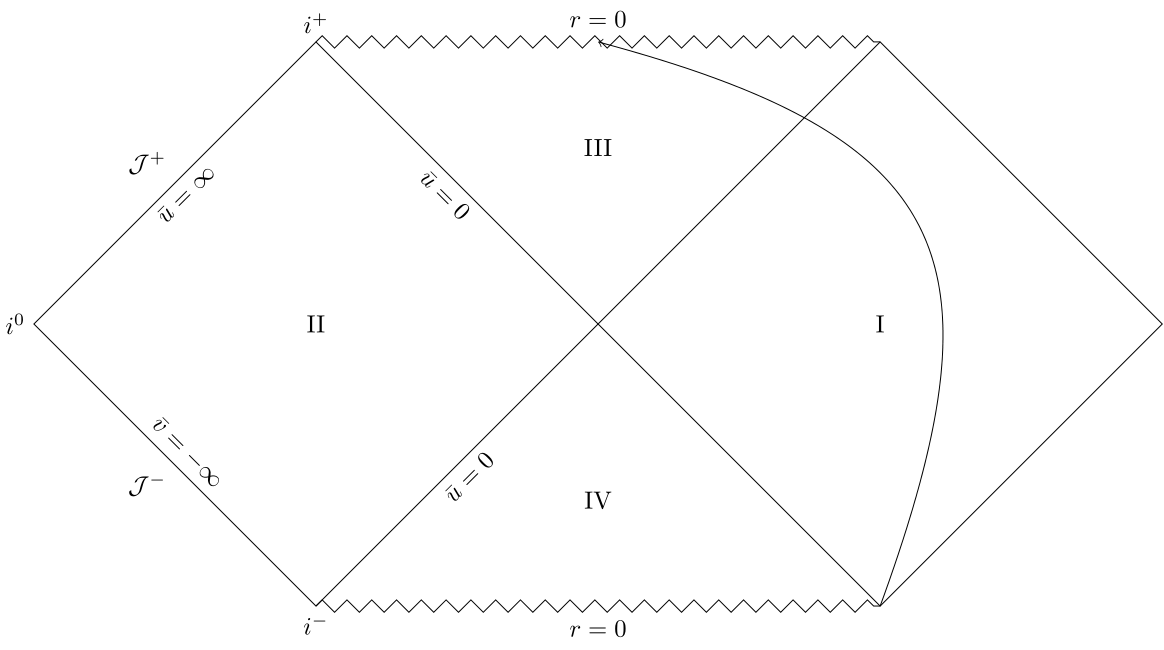 One possibility (as JLDiaz mentions in his comment) is to use coordinates to specify points, and then draw the lines joining the appropriate coordinates; the decorations library can be used to draw the zig-zag lines. A starting point (playing with my code and reading the TikZ documentation you can add the missing elements and customize the result): 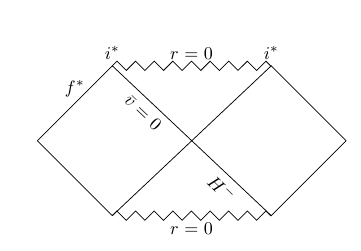 You have different possibilities. With some basic commands of tikz you can try this. I updated the first code . The final result is not complete but it's a good exercice to finish it by yourself.

You have a lot of fine explanations in JLDIAZ's answer. I try to add some explanations to understand the difference between the codes.

Before drawing something, I like to know if I need to adapt the size of the picture with scale for example. I prefer to avoid the positioning library if I need a scaling picture.

\draw is a shorthand for \path[draw]. It's possible to define a path, to draw this path and to define, to draw at the same time some coordinates and nodes.

With the next code, I can use [scale=2] but It's also interesting to define some variables like \myunit(here 4 signifies 4 cm) with the \pgfmathsetmacro command.

Then it's impossible to draw with one path this sort of graphs. The first path begins with \draw (0,0) and it ends with cycle;.

When you add a new coordinate (relative or absolute) you can add to the path nodes. As you can see the code is very simple,but you need to know why sometimes you need to use coordinate or sometimes node. coordinate is a special node with some different parameters.

The last interesting possibility is used in the final path with 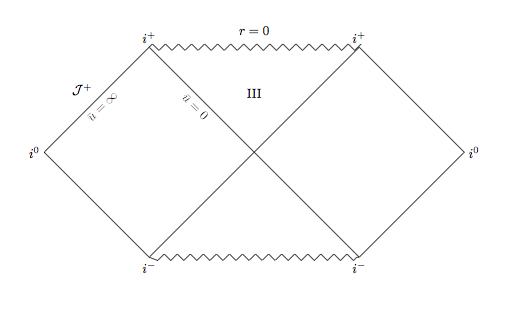 57
Tikz: Arrowheads in the center

20
LaTeX generated website with TikZ diagrams
8
How to make multiple lines precisely converge in one point on an axis?
27
How to produce John Kruschke's Bayesian model diagrams using TikZ or similar tools?
13
tikz-timing: is there a straightforward way to add a numbered time axis?
9
generate simple cylindrical shape with text in latex (tikz)
13
Create diagrams in LaTeX with TikZ
1
How do I position the x and y labels simultaneously for adjacent tikz plots?