I get the behavior I want, but the superscript 2 appears very far to the right because the subscript is so long. If I write instead

the superscript looks fine, but the long subscript displays as a textstyle subscript (not underneath the operator as I would like).

Here is an option: 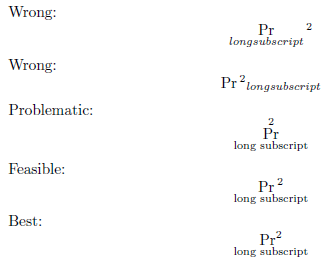 Both 1 & 2 are incorrect for a number of reasons. Not only is the positioning of the superscript incorrect (too far right), but the subscript (which is text) is not set as such. While 2 "corrects" the superscript, the use of \textstyle is incorrect. \textstyle is a switch, not a macro that takes an argument. As such, what follows \textstyle will be set in \textstyle until the end of the group.

The problematic output of option 3 is the placement of the superscript (on top of the operator), even though the subscript output has been properly set as text (thanks to amsmath's \text). Output for 4 uses \mathop as a momentary operator definition, setting the text underneath. The superscript is prevented from being set on top by not placing the any scripting immediately after it. Instead, {} acts as the base for the superscript.

Not the answer you're looking for? Browse other questions tagged math-mode spacing math-operators subscripts superscripts or ask your own question.